Tweet
Did you make it to one of the People's Climate Marches?  The one in Washington DC was GREAT!  Perfect weather and great turnout!  Here are a few of the sights: 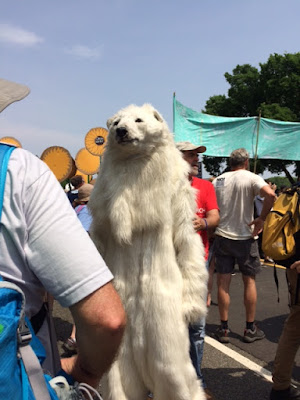 There were representatives from all religions, including Jews, Christians, Muslims, Hari Krishnas, and Unitarians: 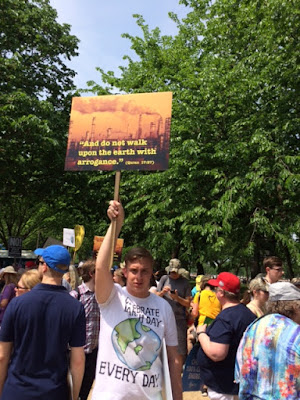 There were big puppets: 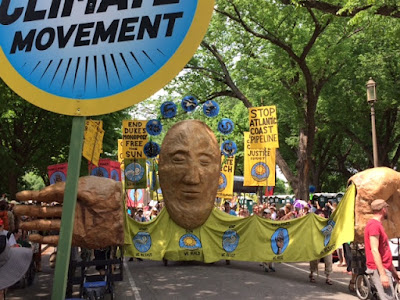 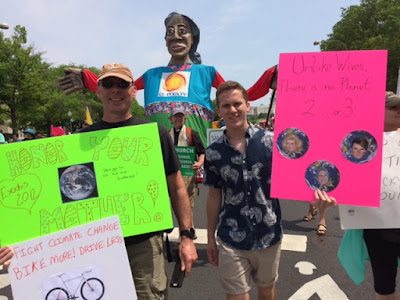 There were Earths, and lots of them: 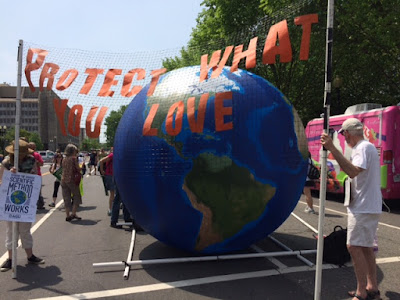 There were clever signs: 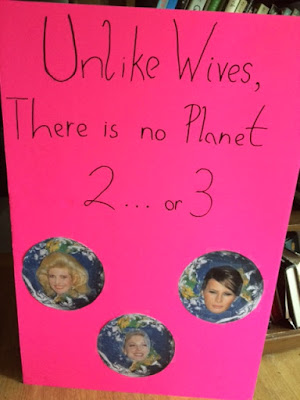 What happened in your town?

So who's going to the march?

Are you headed to a Climate March this weekend?  Register here, so you'll have the schedule and they'll know how many to expect.  Be sure to take pictures and send them me -- I'll post next week! 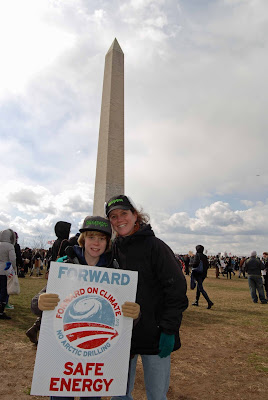 Posted by Desiree at 9:30 AM No comments:

Tweet
Yesterday was the big March for Science, where we encouraged our elected officials to use science as a basis for policy decisions -- including environmental policies!  Scientists and science enthusiasts from all disciplines attended.  It was rainy, cold, and lots of fun!  Let's hope we were heard!  Did you attend any of the marches?  How did it go? 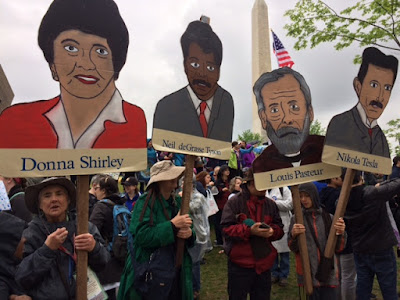 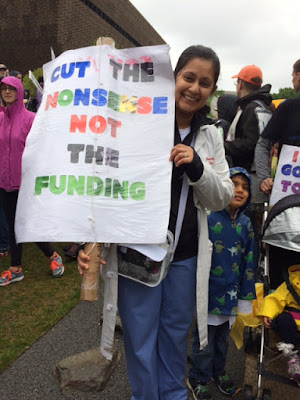 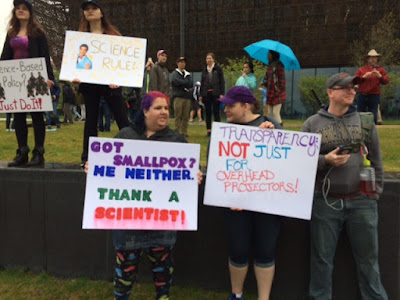 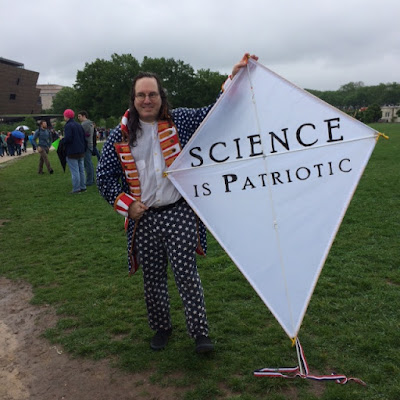 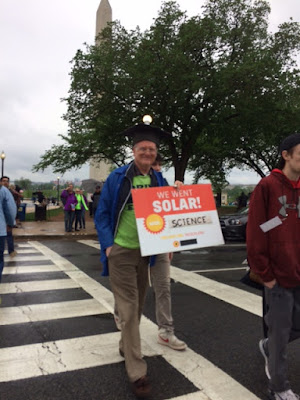 Email ThisBlogThis!Share to TwitterShare to FacebookShare to Pinterest
Labels: science

You are what you eat

Tweet
It's Earth Week, so let's talk about an environmental decision that everyone makes, every day -- what to eat.  Should you eat vegetarian?  vegan?  local? Fair Trade? organic?  Well, it all depends.  In an environmentally-friendly system, food should be:


So what to eat?  The answer is different for each person, because we all have different dietary restrictions, budgets, and places that we live.  Here's an interesting article from CNN on the trade-offs and individual choices.

As stated previously on greenmomster, diets that are low on the food chain (that would be primarily plant-based) are most sustainable.  Whether that means eating vegetarian once a week or going totally vegan, you're helping the environment to feed 7 billion (soon to be 9 billion) people sustainably.

But here's the other area in which we all can help to decrease our food-based environmental footprint -- food waste!  By buying more frequently (so food doesn't go bad in your house), composting, and being willing to buy less-than-perfect-looking food, greenmomsters can help to reduce food waste. Save food, save money, save the environment!

Tweet
I've said it before, and I'll say it again -- I love giraffes!  There's big news on the giraffe front -- April had her baby!  They're looking for names for the giraffe, and I think they should stick with the month theme -- I vote "Augie" for the new giraffe's name!

Tweet
It's gotta be eggs for meat-free Friday this week!

Onion Quiche
I've adapted this recipe from Family Circle Magazine (photo from PinkBites.com), and boy was it a hit at my house! 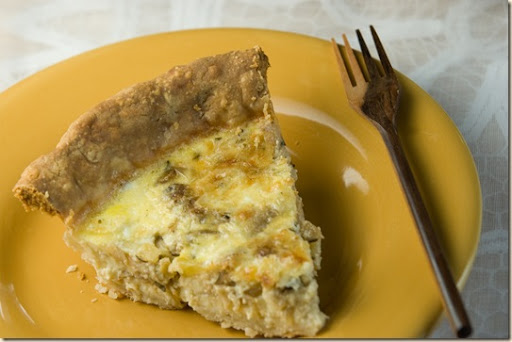 Posted by Desiree at 8:02 PM No comments:

Why the wall is an environmental disaster

Tweet
I've written before about the proposed border wall with Mexico.  Here's a video summarizing the problem for biodiversity -- they even explain Section 7 of the ESA (which the government can get around using a security loophole).

Posted by Desiree at 5:15 PM No comments:

Tweet
This week’s recipe comes to us from Susan Stillman, a former Treehouse Chat environmentalist.

Cheesy Chard from “Recipes for a Small Planet” by Ellen Buchman Ewald (photo from uprisingorganics.com) 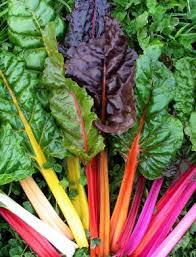 Ingredients
Instructions
Posted by Desiree at 10:35 PM No comments:

Tweet
It’s April Fools Day, so it's time for my annual compilation of Foolish Things I've Done to be Green!  It's my look back at some of the really foolish, yet very earnest, things I’ve tried in the name of planet protection.  I'll just keep adding to the list each year, and I’m sure I’ll have some new items for 2018!

This year's addition -- a Polar Plunge!  In January, my husband and I jumped into the Potomac River to raise money for the Chesapeake Climate Action Network (CCAN)!  Thanks to many of your donations, we raised quite a bit of money, and jumping into the river wasn't  quite as bad as I expected.  So let's keep working toward CCAN's motto -- keep winter cold! 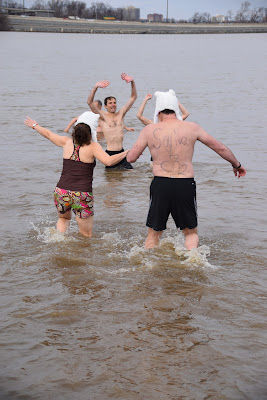 The Invertebrate Shuffle - One of our family traditions is stream monitoring(my kids told me that "spring break in the Bahamas" would be a much better tradition).  Fortunately, I've been training for this activity for over 30 years.  Stream monitoring requires doing the "invertebrate shuffle", which means twisting in the mud for a minute to loosen up all those invertebrates.  I excel at this activity!  I can even add an interpretive touch to the dance!  Sort of like these peacock spiders:

Earth shoes -- OK, they’re not really an environmental item, but this is where it all started for me in the ‘70s.  That “negative heel” was supposed to make me feel close to the earth, but it just gave me muscle strain.  If you really want to wear ugly shoes that scream “I’m crunchy!” just wear Birkenstocks like all of the other greenmomsters out there.

Environmental mascot – this is foolish, yet fun!  During all of my years of dancing, I was always a good technician, yet a lackluster performer.  This situation was due to the fact that I found being in front of an audience to be a little embarrassing.  A good mascot costume solves that problem – all of the fun of performing, with absolutely none of the recognition!  When I was asked to be the EPA “water drop” during 25th anniversary Earth Day celebrations on the Washington DC mall, I couldn’t turn them down.  Then came the pinnacle of my mascot career – Woodsy Owl!  So foolish, yet so much fun!  As Woodsy, I spread the environmental message AND joined in an aerobics demonstration, entertained little kids and the Secretary of Transportation, and danced with abandon in my yellow birdy feet at yet another Earth Day celebration.  To prove my mascot-prowess, I have an official photo of myself (Woodsy). Last April, I added to my mascot resume -- Ranger Rick!  Look for me at Vienna VA's "Walk on the Hill!"

Coconut oil – I decided to decrease my body’s exposure to harmful chemicals found in cosmetics by substituting coconut oil for my usual face cream.  I looked absolutely fabulous, until every pore on my face became clogged, leaving me looking significantly younger.  And by significantly younger I mean I looked like the acne-plagued teenager I once was.

Natural deodorant – Again, trying to lessen my chemical load.  Been there, done that, got the pit-stained t-shirt.

Visiting the Dismal Swamp after a major flood in August – I’m often referred to as the Julie McCoy of our family, planning all sorts of activities and trips.  One type of trip I love planning is the outdoorsy, environmentally-educational trip.  But there was one time when I ran the family’s Love Boat aground.  I read that the Dismal Swamp in southern Virginia was an absolutely beautiful place – I’ve seen pictures since our fateful trip, and indeed, it is a memorable spot.  But timing is everything in life.  I ignored our friends who mentioned that maybe “dismal” wasn’t a good name for a family vacation spot, maybe right after a major flood wasn’t the right timing, and maybe the mosquito population would be booming in the middle of August.  “Pshaw!” I said.  This was a natural area just waiting to be discovered by me and my family!  We loaded up my then 2 year old son in the hiking backpack and headed into the swamp!  Approximately 30 minutes later, we emerged with our tails between our legs, sweaty and swollen from mosquito bites.  Fortunately, we didn’t catch malaria, I didn’t turn our Love Boat excursion into Gilligan’s 3-hour tour, and there was a nearby reggae festival to help us forget our swamp sorrows.

Vegetarian dog food – Although eating lower on the food chain is better for the environment, my dogs do not care.  They were willing to starve themselves rather than help the environment.  They told me that it’s ok to eat meat for every meal, that we should always DRIVE to the dog park, and that climate change is a totally natural phenomenon.

Using a first-generation recycled plastic garbage bag – OK, the technology has gotten much better, and I do use these bags regularly now.  But sometimes it’s best not to be an “early adopter.”  I learned this lesson when the bag I was using while changing the guinea pig cage exploded all over the rec room.

Indoor composting – Need I say more?  Just because it says it’s a good idea on the internet, doesn’t mean it’s a good idea.  I bought my composting bin, filled it with newspaper shreds and my worms that I’d bought off the internet, filled the compost bin with scraps and waited for my worms to work their magic!  Well, the magic was the appearance of hundreds of fruit flies filling my entire basement in a blinding cloud.  Just say no to indoor composting.

I just saw a combination bicycle/push mower that’s definitely going to be on someone’s foolish list next year.

Anyone else have any foolish green adventures you’d like to share?
Posted by Desiree at 4:41 PM No comments: