For this week's Mammal Monday, let's check out the pangolin!  This endangered species (photo from www.savepangolins.org) is a small (species range from 3 1/2 to 70 lbs), scaly mammal found in southeast Asia and parts of Africa.  Also known as scaly anteaters, pangolins use their thick, strong claws and incredible sense of smell to find their primary food of ants and termites.  They are nocturnal and secretive.   The eight species of pangolins live in many different habitats including forests, thick brush, grasslands, and even cultivated areas.  All eight species of pangolin are protected under national and international law, and two of the species are listed as endangered on the IUCN Red List of Threatened Species.  It’s unclear how long pangolins live in the wild, but they’ve been known to live up to 20 years in captivity.  The major threats to pangolins are habitat loss and illegal hunting for their meat and scales (used in Asian medicine).

So pangolins live on the other side of the world and we’ve never even seen one – why should greenmomsters give a flying flit about these animals?  Well, other than the fact that they’re incredibly cute, particularly when the young ride around on their mother’s

backs near the base of their tails (photo from www.savepangolins.org), these species play a vital role in the balance of nature in their ecosystems.  As stated inWildlife Heroes (Scardina and Flocken, 2011), “Pangolins play a critical role in natural insect control, especially ants and termites, saving humans millions of dollars to pest damage and reducing the need for harmful chemical pesticides.  Additionally, pangolin burrows provide shelter for many species, such as rodents and reptiles.”
Want to help with pangolin conservation?  Learn more by joining the Pangolin SSC Facebook page at https://www.facebook.com/pages/IUCN-SSC-Pangolin-Specialist-Group/279294488845768, or make a donation toward conservation at http://www.pangolinsg.org/.  For more information on pangolins, check out www.savepangolins.org.

It's springtime!  The cherry blossoms are blooming and the shad are starting to run up the Potomac.  So although it’s meat-free Friday, I know many greenmomsters like to cook fish on Friday (and today's Good Friday....), so today’s post is a little different.  Thanks to a world population of 7 billion people and industrial fishing methods, many of the world’s fisheries are severely depleted (and under-regulated fish farming can lead to severe pollution).  So what’s a greenmomster with a hankering for fish supposed to do?  The Monterey Bay Aquarium has an app for that!  Here’s the link for a cool app that tells you which fish populations are currently severely depleted and which populations are currently relatively healthy.  You can head to the grocery store or fish market armed with your phone and make environmentally-friendly decisions as you choose tonight’s dinner.  Of course, greenmomster always encourages you to eat as low on the food chain as possible, but we know that once in a while you just feel like some fish!So let’s say you find some sustainably raised and harvested shrimp – why not make a little citrus shrimp?  This recipe is adapted from a cookbook we bought during our annual visit to beautiful Edisto Island SC, ‘Pon Top Edisto, by the congregation of Trinity Episcopal Church.

Tweet
I was born in Carmel, California, and the Monterey Bay area is always a favorite of mine.  This week's mammal comes from beautiful Monterey Bay -- it's the sea otter!  Did you know,

Posted by Desiree at 2:08 PM No comments: 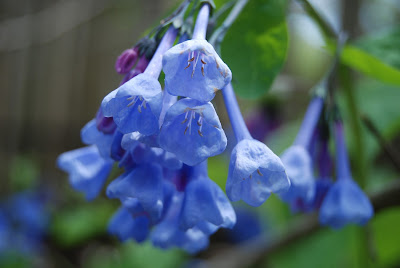 It's almost spring, but we still like stew around here!  I adapted this recipe from one I found many moons ago on the back of a can of Furmano’s Italian Style Diced Tomatoes.  Nice and hearty for a late winter Friday.Ingredients:
Instructions:1)  Preheat oven to 350 degrees.  2)  Combine broth, carrots, celery and onion.  Bring to a boil and simmer for about 10 minutes.3)  Stir cornstarch, basil, oregano, and red pepper into tomatoes.4)  Add tomatoes and beans to simmering vegetable mixture and stir until thickened.5)  Grease a 2 quart baking pan and spoon the vegetable mixture in.  Layer polenta over vegetable mixture and top with cheese.6)  Bake for about 40 minutes.

Tweet
In our occasional series, Celebrities Doing Green Stuff, we take a look at the environmental causes and activities that celebrities have decided to champion.  Today's celebrity is Matt Damon.  His cause -- water!  Water management is a growing concern throughout the world, from drought-stricken California to water-poor Yemen and polluted water in Brazil.  Water is a resource that, when polluted or simply missing, causes widespread suffering and environmental refugees.  Did you know that over 600 million people in India alone (that's double the U.S. population) don't have access to a toilet?  Did you know that the mosquitoes that carry the Zika virus breed in polluted areas and fly during the day (very different from malaria mosquitoes)?  Did you know that the nation of Yemen doesn't have any rivers, so they take all of their water from groundwater -- a source that can be quickly depleted?   Take a look at what Matt Damon is doing and how you can help.

Posted by Desiree at 8:11 PM No comments: 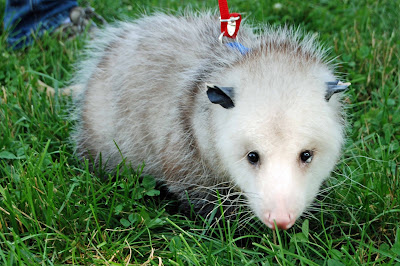 It's #mammalmonday, so let's take a look at two cool mammals -- one that I've never seen in the wild, and one that ran in front of my car last night (no worries! I've got good brakes -- he's just fine!)

Koalas and possums are both marsupials (photo from worldsmostamazingthings.com)!  Virginia opossums are the only marsupials in North America, and koalas are only found in Australia.  Breeding season for Virginia opossums has begun and they'll have 2 to 3 litters with a total of up to 12 or 13 offspring!   Opossums play an important role in the ecosystem; they're omnivores and are prey for many larger species.  How can you help protect opossums, other than getting your brakes checked?  Don't litter!  Many animals are attracted to road-side trash and they're then killed by cars as they look for a meal.  Also remember that although opossums are great climbers, they like to build nests in hollow trees, logs, and rock piles -- so be sure to leave these areas in your yard!

Who doesn’t love koalas, the tree-climbing spokes-mammal of Quantas Airlines?  Adult koalas eat eucalyptus leaves and have a specially evolved intestinal system to be able to harmlessly digest these leaves and the toxins found in them.

Koala size is a perfect example of an ecological rule called Bergmann’s rule  (individuals of a species are bigger in populations that live in cooler climates, usually closer to the poles); southern koalas weigh between 20 and 30 pounds, while northern koalas weigh closer  to 15 pounds.

Koalas give birth to just one baby, a “joey”, at a time.  When the joey is born after about 35 days of gestation, it is only about the size of a jelly bean.  It makes its way from the birth canal to the mother’s pouch, where it will live and grow for the next 6 months, drinking milk and “pap” , a substance from the mother’s intestines.  Much like tree kangaroos, the nipple of the mother koala actually swells or bonds to the mouth of the baby so that the two cannot be separated while the joey develops.
Koalas spend A LOT of time sleeping – 18-22 hours per day!

During the early 1900s, koalas were overhunted for their fur.  Today, koalas are considered threatened under the U.S. Endangered Species Act throughout their range.  Current threats include loss of habitat due to development, car collisions, dog attacks, and disease.  If you’re interested in learning more about koalas, there’s a terrific article in the May 2012 issue of National Geographic Magazine, or in Wildlife Heroes by Scardina and Flocken.

So, koalas are cute and have fascinating evolutionary adaptations – but why should we really care about koala preservation?  According to Wildlife Heroes, “The koala is the symbol of Australia.  It is estimated to be contributing between $1.1 and $2.5 billion dollars annually to Australia’s economy through koala-linked tourism, koala-viewing industry revenue, and purchases of “koalabilia,” which translates into 9,000 jobs for Australians.”  As stated by Deborah Tabart in the same book, “If you cannot save the koala, who does not destroy crops, does not destroy livestock, does not attack – just sits beautifully in a gum tree – then it will be impossible to save any of our nature.  If there is not enough will to save an animal as beloved and harmless as the koala, how can we even begin to address conservation needs for animals like lions and elephants that come into conflict with humans regularly?”
Want to help koala conservation?  Check out the Australia Koala Foundation, the Sunshine Coast Koala Wildlife Rescue, or the Australia Zoo Wildlife Hospital.
Posted by Desiree at 10:10 AM 1 comment:

Tweet
For all the latest meat-free Friday recipes, plus environmental news, be sure to "Like" us on Facebook!
It’s almost asparagus season (photo from vegkitchen.com)!  I love asparagus!  I guess that's my German heritage showing through -- Germans LOVE their asparagus.  They grow white asparagus and have springtime festivals celebrating asparagus.  Germans love asparagus so much, that there's enough information to make a 5 minute video about asparagus:

My favorite way to prepare asparagus is very simple.  First I wash the asparagus, use a potato peeler to peel the stems a little, and snap off the hard ends.  I then place the asparagus on a baking sheet, spray with olive oil, sprinkle with salt, and broil at about 450 degrees for 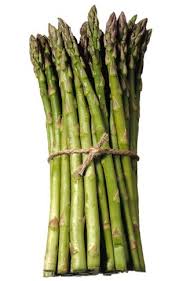 about 15 minutes – delicious!
Feeling a little more ambitious?  Then try this recipe for Lemony Vegetable Risotto that I’ve adapted from Family Circle (July 2012):Ingredients
Instructions1)  Boil the broth and 1/2 cup water.  Add asparagus and peas for about 3 minutes.  Remove veggies with a slotted spoon and set aside, but keep the water/broth.2)  Heat oil and butter in a large pan, and add shallots, cooking for about 2 minutes.  Stir in the rice and cook for another minute.  Pour in wine and cook until the liquid is almost gone.  3)  To the rice mixture, add 1/2 cup of the reserved water/broth, stirring well, and cook until the broth is almost gone.  Repeat this step with additional 1/2 cups of water/broth until the rice is tender (it will probably take about 25 minutes).4)  Stir in lemon juice, parmesan, peas and asparagus.  Enjoy immediately!
Posted by Desiree at 12:23 PM No comments: