Steppin’ out on Meat-Free Friday!

This week’s Meat-Free Friday is a little different – what if you want to eat meat-free, but you really don’t want to cook?  If you’re looking for a good vegan, vegetarian, or even locally-sourced meal at a restaurant, chain restaurants are usually a bad choice.  But my family and I recently learned that’s not always the case.  We were invited for a free meal by Silver Diner to check out their new menu and report on it on greenmomster.  I’m happy to say, the meal was a very pleasant surprise!

We were greeted by our very helpful server, Suman,

who told us all about the new menu featuring lots of great items for the family that likes to eat vegetarian or local.

After picking our favorite songs from the table juke box

and local beer for the grownups

This omelette had just the right amount of cheese (not too much) and a great spicy flavor.  The strawberries on the side added a nice sweetness to the dish.  The Quinoa Coconut Pancakes got mixed reviews

I liked them and thought the bananas on the top gave just the right sweetness; others in the family thought they tasted too “whole grain.”  No problem here – I ate the leftovers for breakfast the following morning!   The most popular vegetarian dish of the evening was the Warm Roasted Local Veggie Salad.

This dish was a tasty mix of beets, brussel sprouts, citrus fruit, lettuce, and peppers – yum!  And here’s a surprise – it was filling enough to satisfy the big eaters in the family!  There were plenty of choices for the meat-eaters in the crowd, including Southwest Flatiron Steak

and Shrimp Scampi, both of which our family enjoyed.  All in all, we were very pleased with Silver Diner’s new menu and the terrific service we received.  It’s great to find a restaurant with lots of tasty choices for those of us who are trying to eat a little greener!

When we moved into our house about 10 years ago, the yard included several nice trees and a garden area in the backyard.  We’ve tried to continue the gardening of the previous owner, adding vegetable and butterfly gardens.  We’ve also tried to make the yard bird-friendly – so far, so good!  Those birds can be pretty noisy in the morning, but it’s fun to watch them having their dinner as we sit at our dining room table having our dinner!

Making the yard bird friendly is pretty easy.  You can start with feeders – be sure to wash them out regularly to help avoid the spread of disease between birds.  Include a water source or two – if you can find a water fountain that makes some splashing noise, it will help attract wildlife.

Finally, be sure to add plants that provide shelter and berries for the birds.  Some easy-to-grow plants include serviceberry (or shad bush, because is blooms as the shad are migrating)

For more information about gardening for the birds, check out National Wildlife Federation’s Backyard Habitat program.

Tweet
Be sure to “Like” Greenmomster on Facebook for all the latest recipes and green news.
A summertime favorite!  Here’s a great gazpacho recipe from my mother-in-law – enjoy! 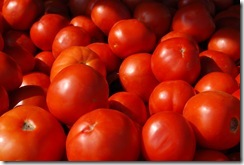 Instructions:
1)  Put first 5 ingredients in a blender and add tomatoes to the top.  Add remaining ingredients and blend until smooth.
2)  Chill in refrigerator several hours, until icy cold.
3)  Serve topped with croutons, chopped tomatoes, cucumber, and onion.  You can also add a dash of curry or chili powder to vary the flavor.
Posted by Desiree at 12:57 PM No comments:

In previous posts, we’ve talked about shad (photo from Chesapeake Bay Program) and their fascinating migration up the tributaries of the Chesapeake Bay.  Here’s the latest update on this species – the Washington Post reports that shad numbers are down. It’s National Pollinator Week!  In honor of the week, why not plant a butterfly garden?  They’re easy to plant and maintain, and they help to support pollinator populations (like butterflies, bees, and flies) in your local area.  You can design your butterfly garden to surround your home or lawn, thus removing grass that you’d have to mow – it’s a win-win!  Even if you don’t have much space, many butterfly nectar and larval plants can be grown in containers – there’s nothing holding you back!

Here’s a photo of one of our butterfly gardens – still plenty of room for a pick-up soccer game.

When you plant a butterfly garden, remember that you’ll need to plant two different types of plants:  1) nectar plants that supply adult pollinators with nectar for energy, and 2) larval plants which pollinators eat when they’re larvae (many pollinators have specific larval plants and can only eat these particular plants when they are in the caterpillar stage – think monarchs and milkweed).    Here are a few examples of nectar and larval plants that grow well in the mid-Atlantic region:

Bee balm (red blooms), Joe-pye weed, lavender, and butterfly bush (but think twice on the butterfly bush, unless you’re good about dead-heading the flowers) are nectar plants that return each year – cost effective and easy to maintain!

Really, Joe-pye weed can be a busy gardener’s best friend!

Liatris (shown here before blooming into gorgeous purple spikes – see photo below for liatris in full bloom) is both a larval and nectar plant:

Planting goldenrod and yarrow provides pollinators with nectar from spring through fall, AND you almost never have to water these two plants:

Bronze fennel is a great larval plant for the black swallowtail, but it spreads, so consider dill instead.

Hops is a great larval plant for anglewing butterflies like commas and question marks – and if you’re really creative, I guess you could brew your own beer too!

Don’t forget to plant milkweed to help the monarchs as they make their North American journey!

Butterfly gardening is great for the environment, beautiful around your home, and saves time and money you could spend elsewhere on your home.  If you’d like to learn more, check out the National Wildlife Federation’s information page. 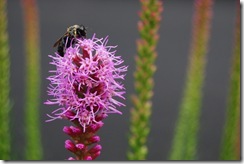 Posted by Desiree at 2:32 PM No comments:

Tweet
This week’s recipe is adapted from Cooking Light magazine and a recipe created by Becky Fulcher of Monument CO. 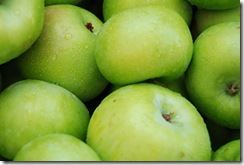 Instructions
1. Combine all ingredients in a large bowl and stir well.  Chill.  Enjoy!
Posted by Desiree at 12:53 PM No comments:

Solenodons: The world’s most vicious rodent

This week’s endangered species spotlight comes from guest blogger, Noah Thompson.  Noah is an 8th grader, avid artist and hockey player, and my son.  His post this week is part of a year-long writing project assigned by his English teachers (way to go, teachers!)

The Solenodon  is a rodent which populates the islands of Cuba and Hispaniola in the Caribbean. Solenodon paradoxus is the species found in Hispaniola.  It is believed that Solenodons have been around for 75 million years, meaning they were around at the time of the dinosaurs!  Though Solenodons have survived for this huge amount of time, they are unfortunately in danger of becoming extinct due to human activity.

It is unfortunate that the Solenodon is slowly becoming extinct for two reasons.  First, the Solenodon kills and eats many unwanted pests that annoy humans.  Second, they are one of the weirdest animals in the world.  The Solenodon gets its name from the grooves in its teeth through which it injects its venom into victims.  It is the only mammal which can inject venom.  Even though these animals are aggressive killers (it is recorded that in captivity one literally shredded a live chicken before eating it), they are extremely clumsy.  When frightened, the Solenodon will either put its head toward the ground and stay still, or it will run away and, in many cases, trip on its feet causing it to roll. This inability to get away from threats is one reason the Solenodon is so close to being extinct.

The Solenodon originally thrived on its two home islands because it had very few predators. When the Europeans colonized the islands, however, they brought with them dogs, cats, and, later on, mongooses. These three predators can easily kill a Solenodon, and they are believed to be the main cause of the creature’s endangered status.  Another problem is the deforestation of the islands on which it lives.  The forests provided a habitat for the Solenodon’s food: insects, lizards, and plants.

The Solenodon is part of the Last Survivors Project. This project was created to raise awareness about Caribbean land dwelling rodents and preserve them. The project’s work on Solenodons is mainly focused on learning more about the animals. The project managers believe that the more they know about the animals, the better they will be able to help them. 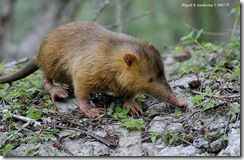 Posted by Desiree at 5:32 PM No comments:

If you want to get your weekly meat-free Friday recipes, be sure to “Like” us on Facebook!

There are roughly a jillion ways to make this dish and everyone claims that theirs is correct.  Most versions are “soupier” than ours, but here’s how we do it at our house and there are rarely any leftovers! 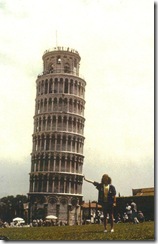 Instructions:
1)  Slice “sausage” into 1/2 inch pieces.  Fry in an excess amount of olive oil until brown (you should have some extra liquid olive oil in the pan when you’re finished cooking).
2)  Add “sausage”, cooking oil, kidney beans, and sauce to the pasta and warm through.  Garnish with parmesan cheese and enjoy with a salad!

Posted by Desiree at 2:26 PM No comments:

Happy World Environment Day to all the greenmomsters who know as the Lorax did,
Unless someone like you cares a whole awful lot,
nothing is going to get better.
It's not.

Our family lives in the Chesapeake Bay watershed, a watershed that has a 16 to 1 ratio of land to water (a watershed is an area in which all water (rain, snowmelt, etc.) runs into the same stream or river).  That means that what we do on the land in this area has a HUGE effect on the ecosystems of the Chesapeake Bay.  One of the things that greatly affects the Chesapeake Bay is stormwater (the water that runs off the land after a rain).  While agricultural land is the source that still contributes the greatest amount of pollutants to the Chesapeake Bay, developed land (land with houses and other buildings) is the fastest growing source of pollutant runoff in the watershed.  In order to reduce the runoff to the Chesapeake Bay (or your local waterway), we are often encouraged to use rainbarrels (to trap rainwater and then use it in our gardens during dry periods) or rain gardens (which allow rainwater to slowly filter through the ground, rather than rushing over hard surfaces like roads and roofs into the sewer system).
A little rusty on the concepts surrounding stormwater runoff?  Check out this short video from the Chesapeake Bay Program:

This month, our family tried our first rainbarrel and it was a big success!  During our first thunderstorm, the rainbarrel filled in less than 30 minutes (way less).  We then used the water in a drip-irrigation system in our garden when things got hot and dry this week.  Very efficient!  We hope to install several more rainbarrels, so that we can take full advantage of every rainstorm!  If you’d like to learn more about rainbarrels, here’s another quick video from the Chesapeake Bay Program.