I’ve been following the Sea Turtle Conservancy’s Tour de Turtles, eagerly hoping to see how my adopted turtle, Shelley, was doing against the fierce competition!  Unfortunately, it seems that Shelley is no longer transmitting. I’m not sure what’s up, but I’m guessing her tag fell off or ran out of batteries (I’ve sent an email to Sea Turtle Conservancy to find out the details).

I’m going to believe that Shelley’s swimming somewhere in the Atlantic, tag-free!  And I’ll also “adopt” another sea turtle soon.  If you’re interested in adopting and tracking your own sea turtle, here’s the link! (photo:  Sea Turtle Conservancy – Shelley)

Posted by Desiree at 9:57 AM No comments:

In honor of the big papal visit this week, I’m reposting about the “Green Bible” that my brother gave me a few years ago.  I think Pope Francis might like this version too!

Throughout the years, my brother has given me many terrific and interesting gifts.  I still wear the freshwater pearl earrings proudly on special occasions.  The “Dr. Des” hat, which I received at graduation isn’t worn quite as frequently, and my “this is most certainly true” Lutheran sweatshirt is really only appropriate in South Dakota.  The Nude Beaches of the World travel guide hasn’t come in handy……yet.

My brother surprised me with a great gift the other day – the NRSV Green Bible!  It’s a standard Bible, plus a little more.  For those of you familiar with the “red-letter edition” of the Bible, this version is a “green letter edition”.  As explained in the preface, the green 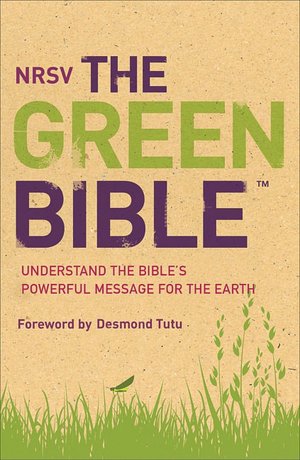 letter edition is meant to “highlight the rich and varied ways the books of the Bible speak directly to how we should think and act as we confront the environmental crisis facing our planet.”  As the reader moves through the chapters, they see passages that speak directly about four main themes:

The Bible includes essays by several faith and environmental leaders (including Desmond Tutu), and it also includes nice “Bibles hikes” or Bible studies focusing on specific themes.  The kids and I have been taking these “hikes” through the Bible, and they’re great little devotionals for starting our day.

For anyone interested in how the Bible and environmentalism fit together, or interested in “greening” his or her church, the Green Bible is definitely worth studying.

This week’s meat-free Friday recipe is a side-dish, rather than a main dish, that I adapted from a Cooking LIght recipe (photo credit:  Cooking Light).  This one is always a hit when I serve it! Posted by Desiree at 3:38 PM No comments:

I’m a very fortunate person, because I’ve actually had a close encounter with this week’s endangered species, the Maned Wolf.  Maned wolves are beautiful creatures who live in the grassy areas of central south America (parts of Argentina, Bolivia, Brazil, Paraguay, and possibly parts of Peru and Uruguay).  These wolves (people often say look like “foxes on stilts”) are omnivores, hunting at night and eating a diet which includes fruits and berries as well as small animals like rodents, reptiles, and insects.  Because of this diet, the wolves play an important part in their ecosystems, controlling animal populations lower on the food chain and acting as seed dispersers.  One of their primary food sources is the lobeira berry -- this fact caused some difficulty when zookeepers were first trying to raise the wolves in captivity many decades ago.  Zookeepers knew that the wolves were omnivores, but didn’t know about the importance of lobeira berries in their diet.  Until they worked out this puzzle, the wolves often suffered from dietary problems in captivity.

As mentioned on the ARKive website, these solitary wolves live in home ranges of 25 to 50 square km and only come together during the breeding season.  Females reach sexual maturity at one year and can give birth to litters of 1 to 5 pups.  The primary threat to these wolves, as is the case with many other endangered species, is habitat loss.  Scientists and conservation managers are working hard to protect these wolves from loss of their habitat, as well as negative contact with humans and road kills.

I just read about Rogerio Cunha de Paula, one of the leading biologists working to protect the species.  He is working to protect the Serra da Canastra National Park in Brazil from logging, mining, and conversion of habitat from soil plantations (see the book Wildlife Heroes by Julie Scardina and Jeff Flocken for more info).  Many other people are also working hard to protect the wolves, and that’s how I got my close encounter.  The National Zoo has been involved in maned wolf conservation for over 30 years and is the coordinator of the Species Survival Plan for the maned wolf.  As a volunteer with the zoo, I was an “interpreter” about maned wolves for the public.  One of the keepers at the maned wolf exhibit, my friend Kim, took extra time with me to teach me how truly special these animals are – she shared her knowledge of the wolves and gave me an unforgettable look at these fascinating creatures!  What a treat to see these animals close-up, to hear their specific vocalizations, and yes, even to smell their (very strong) scents during mating season.  Based on these encounters, I can say that the world would be a poorer place without the beautiful maned wolf.

Posted by Desiree at 7:41 PM No comments:

I found out about this week’s recipe while watching Martha Stewart on the Today Show.  I’ve taken her Tomato and Zucchini Tart and made a few changes to make the recipe a little more weeknight-friendly.  It was a big hit with the family! 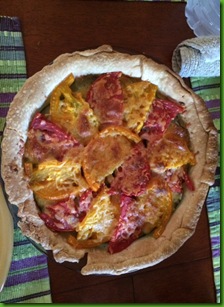 Don’t forget to “like” greenmomster on Facebook for all the meat-free Friday recipes and other environmental news!

Carrion–it’s not just for breakfast anymore

While some species populations, like the King Vulture (Sarcoramphus papa) pictured here,

are doing well, other species populations, like the California Condor (Gymnogyps californianus)and the Andean Condor (Vultur gryphus) are less secure.  These massive birds are nature’s waste management experts, cleaning areas of dead and rotting carcasses.  Their bodies are specially adapted for this task with their bare heads and strong beaks.

California condors are one of the best known survival stories in conservation biology.  These spectacular birds, with wingspans of up to 10 feet, can soar as high as 15,000 feet!  In the 1970s, the population dwindled to only 2 or 3 dozen birds, and then dropped to only 10 birds in 1987.  Since the birds don’t reach sexual maturity until 6 to 8 years of age, and then they breed slowly, recovery of the species was difficult at best.  Through the persistent work of endangered species biologists, reintroduction of the birds began in 1992 and now 127 individuals live in the wild.  The Andean condor population is doing better than its California cousin, with a few thousand individuals found in the wild.  Like the California condor, it’s a slow breeder and a vital link in the food chain (info from National Geographic).  It’s probably the vulture with which you’re most familiar, because it’s the one that looks like it has a white, fur collar around its neck.

So get out there and celebrate Vulture Awareness Day – without scavengers our world would be A LOT messier!

Want to learn more about the role of vultures in humans’ lives?  Check out this fascinating NPR story about India’s vanishing vultures and India’s Parsis.  (photo from www.npr.org, showing a Parsi Tower of Silence, circa 1955, near Mumbai, India).  Scientific American blog network recently reported there’s some good news for India’s vultures, thanks to a new ban on diclofenac, a painkiller used on cattle and buffalo.  This drug can kill vultures when they eat the carcasses of animals treated with the drug. For more info, check out the full article.

Have you been watching Big Blue Live on PBS this week?  This live show’s website explains that the program “celebrates a wildlife success story and marine animal phenomenon: humpback whales, blue whales, sea lions, elephant seals, sea otters, great white sharks and more all convene in Monterey Bay once a year.”  The show includes lots of interesting marine factoids, live shots from above and below the water, plus film clips that provide extra, in-depth info.  It also allows viewers to participate on social media.  Kind of a fun way to spend an hour!

So for our endangered species of the week, let’s take a closer look at two related animals found a little further north  – seals.  Both of these cold-weather-loving species are protected under both the Marine Mammal Protection Act (MMPA) and the Endangered Species Act (ESA).  Both are threatened by the loss of

The ringed seal is the smallest seal (averaging 110-150 lbs and 5 feet in length) in the arctic, feeding on fish and invertebrates.  They are generally solitary animals.  Females reach sexual maturity around 4 years, while males don’t mature until about age 7.   Gestation lasts about 9 months, and the females give birth in ice “lairs” that they build out of the thick ice in their habitat.  These small seals can live 25 to 40 years.  Seal fun fact:  these guys can dive for 45 minutes without a breath!

On the other end of the spectrum, the bearded seal is the largest seal in the arctic, weighing in at a hefty 575 to 800 lbs!  These seals also have a lifespan of about 25 years and are thought to reach breeding age around 6 to 7 years.  These seals are divers, feeding on benthic creatures such as shrimp, cod, crab, octopus, and clams. For a very cool video of the bearded seal, see this Arkive video!

Posted by Desiree at 9:20 PM No comments: