Be a super hero–protect orangutans! 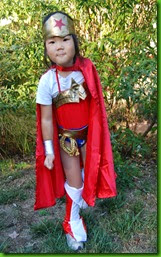 I know it’s meat-free Friday, but let’s be honest – we won’t be eating dinner tonight.  It’s all candy, all the time, tonight!  Did you know there’s a connection between orangutans and Halloween? It turns out that orangutans live in tropical rainforest that is threatened by the production of palm oil. This palm oil is used in many food products including, you guessed it – many Halloween candies. But there’s good news! A group of snack and candy producers has formed the Roundtable on Sustainable Palm Oil (RSPO) which pledges to only use palm oil farmed using sustainable methods. Here’s some candy that’s part of the RSPO pledge – all of the sweets and none of the guilt! For more info, see www.rspo.org

Posted by Desiree at 9:28 AM No comments:

For our endangered species of the week, I’m rerunning an earlier post about a very “Halloweeny” species – the Kauai Cave wolf spider!  So read through and then learn 7 facts about spiders that you might not have known!

The Kauai Cave wolf spider (Adelocosa anops), also known as pe’e pe’e maka ‘ole in Hawaiian (from Earth’s Endangered Creatures) is found in only three caves on the Hawaiian island of Kauai.   Like other wolf spiders, the Kauai Cave wolf spider doesn’t build a web to capture prey; it relies on speed and chases down its prey.  Like all other spiders, it is venomous; it has three teeth for biting it’s prey.  What’s really amazing about this hunting style is the fact that these spiders don’t have eyes (from Arkive)!

According to the U.S. Fish and Wildlife Service Species Action Plan, the main threats to the spider are alteration of the caves and surrounding vegetation, non-native predators, and pesticide run-off.

So really, who cares?  It’s just one little spider in a few caves in Hawaii.  The answer is:   when we protect these little spiders, we help ourselves.  If pesticides from agriculture are bringing these spiders near extinction, there’s a pretty good chance those pesticides in water run-off are also affecting human populations.  It’s in our best interest to clean up the water – the spiders win and humans win!

Posted by Desiree at 9:31 PM No comments:

Enjoy!
Posted by Desiree at 4:14 PM No comments:

My students were asking a lot of questions this week about reptiles and their brain power, so I’m reposting this article about the Komodo dragon (Varanus komodoensis).  Found in the wild on a few volcanic islands in Indonesia, this largest of all reptiles (with large individuals weighing over 150 lbs) will eat almost any type of meat.  It is endangered 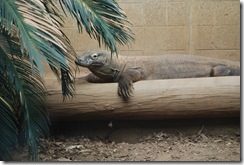 Posted by Desiree at 7:47 AM No comments:

In my previous post about the state of birds in the world, the video interview mentioned that we’ve already lost 10 bird species in Hawaii to extinction – a sad report indeed.  So I figured I’d share with you a teeny, tiny, thin silver lining on climate change and species survival.  In September, the Washington Post reported on a study by researchers at Dartmouth College and UVA.  These researchers found that some species of lizard seem able to adapt and function at higher temperatures.  Previously, researchers didn’t think tiny lizards could adapt their behavior so quickly to changes in temperature, but they found evidence that little brown anolis in the Bahamas can adjust.

Just eating a little less meat makes a big difference!  Here’s a reminder from “Don’t Just Sit There – Do Something!”

I've adapted this recipe from Family Circle Magazine (photo from PinkBites.com), and boy was it a hit at my house!

Ingredients:
1 frozen pie crust
1/4 cup olive oil
4 cups chopped onions
5 eggs
1 cup heavy whipping cream
1 tblsp dijon mustard
1/2 tsp salt
1/4 tsp nutmeg
1 cup shredded swiss cheese
Instructions:
1)  Heat oven to 375 degrees (but just for a couple of minutes!)
2)  Heat oil in a large frying pan over medium heat.  Add onions and cook until browned and soft (stir once in a while), about 30 minutes.
3)  In a bowl, whisk together eggs, milk, mustard, salt, and nutmeg.  Remove pie crust from freezer, and sprinkle cheese evenly on bottom of crust.  Spread onions on top of the cheese.  Pour egg mixture over cheese and onions.  Bake quiche for 45 minutes or until eggs are set.

Posted by Desiree at 8:16 AM No comments:

Since this week’s earlier post was about birds, I figured I’d use this past post for TBT AND Halloween!  Enjoy!

Since September 1, 2012 (and Sept 6, 2014), was International Vulture Awareness Day, this week’s endangered species is a group of animals – the vulture!  While some species populations, like the King Vulture (Sarcoramphus papa) pictured here,

are doing well, other species populations, like the California Condor (Gymnogyps californianus) and theAndean Condor (Vultur gryphus) are less secure.  These massive birds are nature’s waste management experts, cleaning areas of dead and rotting carcasses.  Their bodies are specially adapted for this task with their bare heads and strong beaks.

California condors are one of the best known survival stories in conservation biology.  These spectacular birds, with wingspans of up to 10 feet, can soar as high as 15,000 feet!  In the 1970s, the population dwindled to only 2 or 3 dozen birds, and then dropped to only 10 birds in 1987.  Since the birds don’t reach sexual maturity until 6 to 8 years of age, and then they breed slowly, recovery of the species was difficult at best.  Through the persistent work of endangered species biologists, reintroduction of the birds began in 1992 and now 127 individuals live in the wild.  The Andean condor population is doing better than its California cousin, with a few thousand individuals found in the wild.  Like the California condor, it’s a slow breeder and a vital link in the food chain (info from National Geographic).  It’s probably the vulture with which you’re most familiar, because it’s the one that looks like it has a white, fur collar around its neck.

So get out there and celebrate Vulture Awareness Day – without scavengers our world would be A LOT messier!

Want to learn more about the role of vultures in humans’ lives?  Check out this fascinatingNPR story about India’s vanishing vultures and India’s Parsis.  (photo from www.npr.org, showing a Parsi Tower of Silence, circa 1955, near Mumbai, India)

Posted by Desiree at 7:13 AM No comments:

With the recent releases of the 2014 State of the Birds Report, birds have been in the news.  There’s good news and there’s bad news:

One of the species of concern is the cerulean warbler, which is a small migrant that lives and breeds in Eastern forests and then heads to the tropics for the winter.  I’ve been reading an interesting book about these

little birds, Cerulean Blues, by Katie Fallon.  Part bird history, part memoir, the book is an interesting story of one woman’s adventure searching for these elusive little birds.  It turns out that the energy we use (coal) actually has an impact on the survival of this species.

In addition to the State of the Birds Report, the Audubon Society recently issued its Birds and Climate Change Report, 314 Species on the Brink.  The accompanying website allows you to see how the specific species in your area are affected by climate change – this is really a cool tool for educating yourself about your local area!

We know that the biggest conservation successes will come from preserving large areas and making some big changes in how we get our energy, but how can one person help?  Adrian Higgins, in his Washington Post column, had a few great ideas:

After you’ve created your bird-friendly habitat, get yourself a pair of binoculars and a bird ID book and enjoy your feathered visitors!

OK, here’s a really simple way to make a tasty soup.  You’re going to have to play fast and loose with the ingredients – I’ll tell you what I use and you season to taste.  Have fun! 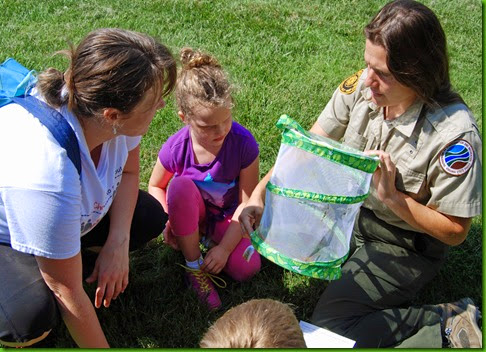 It’s easy!  You simply catch the butterfly, attach a tag to the wing area that looks like a tiny mitten (the program provides diagrams), and then release the butterfly! 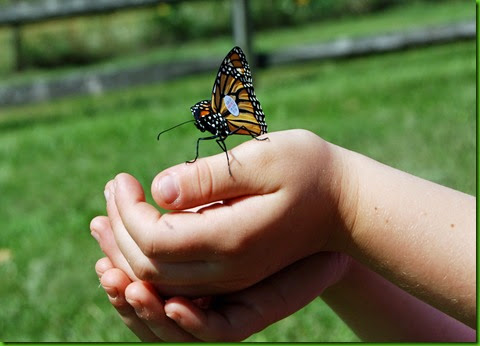 This strong little insect will then attempt to fly all the way to Mexico, and you’ve just provided a valuable tool to scientists who are trying to learn about migration patterns and population size.

Want to learn more about the monarchs and their migration?  Be sure to check out Four Wings and a Prayer by Sue Halpern.

Posted by Desiree at 2:32 PM No comments:

Tweet
October 1 was World Vegetarian Day, so let’s celebrate with something a little international – Madras Pie!  I adapted this recipe from one I found in the October 2014 issue of Family Circle magazine. 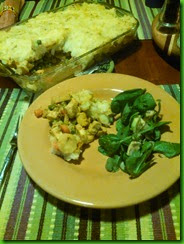 Posted by Desiree at 6:07 PM No comments: