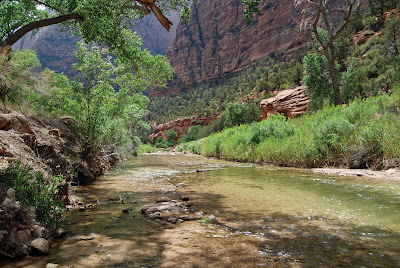 Water and Wall is a great restaurant in Arlington VA, owned by one of my neighbors.  I thought of this restaurant's name when I was reading the Washington Post the other day.  Two articles in the A section got me thinking about our nation's fiscal priorities.  One article, Despite cost, GOP ready to fund wall by Mike DeBonis discusses the funding of the proposed border wall with Mexico.  The cost of the wall is estimated between $8 and $10 billion, and when we asked Mexico to pay, they basically told us to pound sand. Thus, if it happens, the U.S. taxpayers will be footing the bill.  Funding isn't the only issue with the proposed wall; these structures also cause major environmental impacts, as explained in BioScience and the BBC.  The U.S. border with Mexico already has large areas that are fenced, and these areas have given us a taste of the environmental impacts to come.

The second article discussed the issue of aging infrastructure and lead contaminated drinking water in towns across the U.S.  (Lead-tainted water in Louisiana a harbinger for other U.S. Towns, by Brady Dennis).  Just as we saw in Flint, MI, the article states that, "Nationwide, an estimated 6 million or more lead pipes remain in use by more than 11,000 community water systems serving as many as 22 million Americans. While some cities, such as Lansing, Mich., and Madison, Wis., have replaced all their aging lead pipes, doing so is an expensive and time-consuming undertaking — and one many communities simply cannot afford."  The article states that the price tag to replace all pipes could be as high as $30 billion.

I'd be interested in your feedback.  To prevent the damage that lead poisoning causes, including brain damage, should the federal government get involved? Are you concerned about environmental damage from a proposed border wall?  Should we fund one, both, neither?  Where should our resources go and why?
Posted by Desiree at 4:13 PM