Saving species -- I don't want to "get over it" 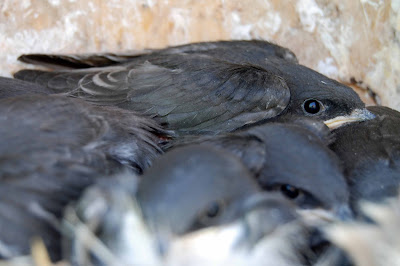 A recent opinion piece in the Washington Post, "Species die. Get over it." by R. Alexander Pyron, has a lot of people talking.  In this article, Dr. Pyron states that we are in a mass extinction period (often called the Anthropocene), but it's not really something we need to worry about.  He states:


I've written many times about specific endangered species, endangered species management and conservation, success stories, and misconceptions.  As these posts demonstrate, I heartily disagree with Dr. Pyron's statement that human-caused extinction isn't morally wrong.  Yes, humans have always impacted species, sometimes causing extinction, but we've never caused extinctions at the rate we see today.  Where Dr. Pyron really went astray was when he started talking about evolution and extinction. While it's true that species do go extinct due to natural selection and evolution, that background rate of extinctions is estimated at 10-25 species worldwide per year.  Currently, the rate is estimated at 100 to 1000 species worldwide per year.  Thus the rate of extinction is currently 10 to 100 times what we would expect from natural selection and evolution.

Dr. Pyron also states that species will either evolve or disappear in response to human pressure.  He seems to forget that evolution is not a process measured in decades or even centuries.  Evolution occurs over thousands and tens of thousands of years for most species.  Evolutionary change is not what we are seeing in response to the pressure put on other species by humans during the last 200 to 300 years.  We are seeing the complete annihilation of species, because there is no time for populations to adapt.  Did we see complete annihilation in the past?  Yes, but usually this destruction was done on a population level, not at a species level.  Populations are local groups of individuals of one species.  Sometimes, due to a changing environment, populations will be extirpated, but other populations of the species remain and evolve.  What we're seeing currently is the loss of entire species, rather than isolated populations.

Finally, Dr. Pyron states that we'll be fine without the species we lose -- we can "technology" our way out of the problem.  To paraphrase James Comey, "Oh Lordy I hope you're right," but I don't think you are.  First off, we don't understand the natural world well enough to be able to control it.  Second, biodiversity tells us about our environment -- species are indicators of our environmental health.  If a skunk, orchid, crane, or frog can't survive in this environment, what makes us think we can?

So what's the plan?  I disagree with Dr. Pyron that we should "get over it."  Rather, we should adopt the "precautionary principle" which states that we should avoid actions unless we're sure that they will not lead to future harm.  Species conservation, from habitat protection to last-ditch efforts at captive breeding, is a necessary step to ensure a healthy planet for future generations.
Posted by Desiree at 2:49 PM No comments:


This one’s a winner!  I found it in the Washington Post Food section.  The recipe was developed by Mark Furstenberg for his bakery, Bread Furst.  I doubled the recipe (this version makes 5 1/2 cups) and didn’t puree the entire thing – I left some tomatoes, peanuts, celery, etc for a little crunch.  Also, if you’re not a fan of heat, be sure to cut the cayenne pepper.  Enjoy! (photo credit:  Deb Lindsey for Washington Post)

Ingredients
Instructions
Posted by Desiree at 8:49 AM No comments: In case you haven't heard, COP23 is going on in Bonn Germany.  What's COP23?  Check out this great summary by Climate Mama.  There's a representative there from my church, the ELCA, and we're looking forward to her summary -- I'll keep you posted!

Tweet
This week, Senate Energy and Natural Resources Committee Chairman LIsa Murkowski (AK -- R), introduced a bill that would open the Arctic National Wildlife Refuge (ANWR) to oil and gas drilling.  There are so many reasons that this legislation is a lousy idea:


Just when we thought ANWR was off the table (it's been off the table for at least 20 years), here they come again.  Be sure to contact your Senator to tell them that this legislation is a step backward.  And now let's take a look at a re-post of a species that will be negatively impacted by this legislative mistake:

This week’s endangered species is the polar bear (Ursus maritimus)(photo from http://worldwildlife.org/species/polar-bear).   These powerful symbols of the arctic weigh between 500 and 1000 lbs (and even up to 1400 lbs!), feeding primarily on ringed seals (U.S. FWS 2009).  Polar bears are extremely strong swimmers and can live from 25 to 30 years in the

wild.  To live in the harsh arctic climate, they have evolved several different adaptations to stay warm – they’ve got a thick layer of blubber and are covered in a thick layer of insulating fur.  Although the fur is white (providing camouflage in their white, icy environment), the skin underneath is actually black, allowing it to absorb the sun’s rays.  Even the soles of the polar bear’s feet are covered in fur (National Geographic ND).

At around 3-5 years of age, polar bears are ready to reproduce (U.S. FWS 2009).  Females dig dens in the arctic ice and give birth during the winter, usually to twins.  The young stay with the female for over two years, in order to learn survival skills.  All parental care is given by the female; in fact, the females must protect the young from the males who have been known to kill the cubs (National Geographic ND).

The polar bear population is currently estimated at 20,000-25,000 (U.S. FWS 2009).  Polar bears are listed under the Endangered Species Act as threatened (U.S. FWS 2013) and listed on Appendix II of CITES, with primary threats to the population being the loss of sea ice, due to climate change.  Several international agreements are in place to try to protect the polar bear and its habitat; Canada is the only nation with polar bears that currently allows sports hunting of this species (Washington Post 2013).  Unfortunately, there was recently a set-back for polar bear protection at the international meeting of the Convention on International Trade in Endangered Species (CITES) of Wild Fauna and Flora.  The group rejected a U.S. proposal to ban the global trade of polar bear parts.  Canadian Inuits led the opposition (citing the need for international trade to protect their economy); 42 countries opposed the U.S. proposal, 38 voted in favor, and 46 members, including the 27 members of the European Union, abstained.  Truly a disappointing day in the history of polar bear conservation.

Why should we care about the polar bear?  As stated on the World Wildlife Federation’s website:  “Polar bears are at the top of the food chain and have an important role in the overall health of the marine environment. Over thousands of years, polar bears have also been an important part of the cultures and economies of Arctic peoples. Polar bears depend on sea ice for their existence and are directly impacted by climate change—serving as important indicator species.”   To learn more about the polar bear and what you can do to help, be sure to visit:  http://worldwildlife.org/species/polar-bear
Sources:
Eilperin, J.. 2013. “U.S. Proposal to Protect Polar Bears Fails.” Washington Post, March 8, 2013.
National Geographic.  ND.  “Polar Bear Ursus maritimus”  Accessed online 3/8/2013.  http://animals.nationalgeographic.com/animals/mammals/polar-bear/
U.S. Fish and Wildlife Service.  2013.  “Species Profile.  Polar Bear (Ursus Maritimus)”  Last updated 3/8/2013.  Accessed online 3/8/2012.  http://ecos.fws.gov/speciesProfile/profile/speciesProfile.action?spcode=A0IJ
U.S. Fish and Wildlife Service. 2009.  “Polar Bear Ursus maritimus”  Last updated October 2009.  Accessed online 3/8/2013.  http://www.fws.gov/endangered/esa-library/pdf/polar_bear.pdf
World Wildlife Fund.  2013.  “Polar Bear”  Accessed online 3/8/2013.  http://worldwildlife.org/species/polar-bear
Posted by Desiree at 10:57 AM No comments:

Tweet
One of my favorite exhibits at the Smithosonian's National Zoo is the naked mole rat exhibit.  I love watching these little guys crawl through their tunnels and over one another.  But many people aren't as fascinated or charmed by naked mole rats as I am (we'll agree to disagree), so why should we be interested in these creatures?  Here are a few reasons:

Check out this ScienceFriday video on these wonderful creatures:

Tweet
This week's mammal is the pangolin, which we've discussed previously.  But this week, we've got Jackie Chan too!  Read the blog post and enjoy the video:

So here's what I did with the last eggplants.... 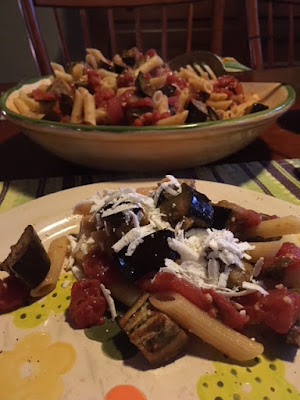 I had a few last eggplants in my garden, so here's what we did with them.


Instructions
Enjoy!
Posted by Desiree at 9:21 AM No comments:


The Washington Post today reported on a study in the British medical journal, the Lancet, in which 63 researchers from 24 institutions worldwide described current and future health effects of climate change.  A few notable findings from the article:


Check out the full article from the Washington Post, by Ben Guarino and Brady Dennis.  And then consider this issue and the candidates' stances on climate change as you go to the polls on Tuesday.
Posted by Desiree at 12:46 PM No comments: