A few misconceptions about endangered species….

In case you haven’t seen him, Siku is easily one of the cutest babies on the planet.  Check out more info on this adorable baby polar bear at the Scandinavian Wildlife Park in Denmark.   Siku’s keepers hope that he’ll be an ambassador for his species and a vivid reminder of the effects of climate change on species, such as the polar bear.  Scientists at the U.S. Fish and Wildlife Service (USFWS) listed the polar bear as threatened under the U.S. Endangered Species Act on May 15, 2008.  That means that the USFWS found enough evidence of polar bear species decline to warrant special legal protection.  So what’s threatening the future existence of polar bears?  According to the USFWS, the loss of sea ice threatens the future of the species.  Other than the fact that he’s so darn cute, why should we care about the loss of one species?  Here are 4 common misconceptions about endangered species:
Misconception #1 -- Species have always gone extinct, so we don’t need to worry right now.  True, species have always gone extinct.  Scientists are not concerned about the fact of extinction; it’s the rate of extinction that is a concern.  The USFWS, in its pamphlet “Why Save Endangered Species?”, states “Biologists estimate that since the Pilgrims landed at Plymouth Rock in 1620, more than 500 species, subspecies, and varieties of our Nation’s plants and animals have become extinct.”  Wow!  Current estimates of the current rate of species extinctions are 100 to 1000 times the natural rate which is estimated to be between 1 every year to 100 years.  That means that we’re living in a time of mass species extinction, comparable to the extinction of the dinosaurs.
Misconception #2 -- Losing a species won’t affect humans.     Species diversity is a critical element in ecosystem health.  “Species diversity” is how many different species are found in a habitat and in what proportion they’re found.  Some habitats have greater species diversity than others – think rainforest – but all habitats are healthiest when they contain as many different species as they can sustain.  Think of a habitat as a fishing net, with each species being piece of rope that connects to other pieces to form the net.  If one of the pieces of rope breaks and leaves a small hole, the net can probably be fixed and reused.  But what if half the net is torn?  It won’t be very useable.  The same thing happens in a natural habitat; remove too many species and the habitat ceases to function.  How many species can be lost, before the habitat doesn’t function?  No one knows – is it an experiment we’re willing to try?  The habitats around us provide many services such as medicinal and agricultural resources, clean water and air, and recreation.  Healthy habitats benefit humans – they’re a necessity, not a luxury.
Misconception #3 – Once a species is on the endangered species list, it never comes off.   Incorrect!  Protections under the U.S. Endangered Species Act have led to the recovery of several species or populations of species, including the gray whale, the bald eagle, the brown pelican, and the gray wolf.
Misconception #4 – Pollution is the greatest threat to biodiversity.  Actually, habitat loss is the greatest threat to biodiversity.  With 7 billion humans on the planet, we take up a lot of space and we’re changing a lot of habitat to new uses.
Misconception #5 – There’s nothing I can do to protect the Earth’s biodiversity.  (OK, I threw in an extra)  In order to protect biodiversity and endangered species, we all have to make conscious choices about how we use resources.  Check out the “low hanging fruit” section as a start.  Visit www.myfootprint.org to discover new ways of decreasing your carbon footprint.  Get involved in how our country produces energy – research the issue and write to your political representatives.  One final thought from famous biologist E.O. Wilson,  “The one process now going on that will take millions of years to correct is the loss of genetic and species diversity by the destruction of natural habitats. This is the folly our descendants are least likely to forgive us.” (From Brainy Quote. Web.  12/31/11.  <http://www.brainyquote.com/quotes/authors/e/e_o_wilson_2.html#ixzz1i9a6zlii>)
Posted by Desiree at 5:29 PM 1 comment:

1)  Heat olive oil in a pan.  Add green and red pepper and onion; saute until onion is almost translucent.  Add vegetarian ham and saute for about 2 more minutes.
2)  Add blackeyed peas and salt to the vegetable/ham mixture.  Cook for another 10 minutes on low heat.
3)  Serve over rice with sour cream and salsa.
Posted by Desiree at 12:22 PM No comments:

Tweet
Still keeping it simple!  So if you're not doing the Feast of 7 Fishes this weekend, give this a try.... 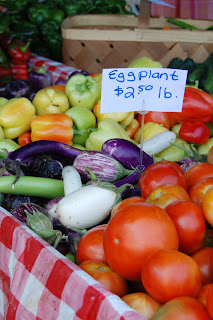 Posted by Desiree at 5:08 PM No comments: 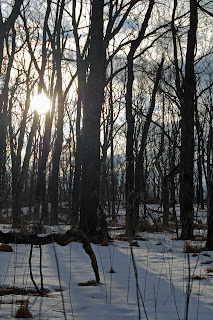 A glimmer of hope for brown bats on the east coast -- Merry Christmas!  http://www.washingtonpost.com/national/health-science/little-brown-bats-found-that-appear-to-resist-disease-that-has-devastated-species/2011/12/21/gIQAwJD99O_story.html
Posted by Desiree at 5:59 PM No comments:

So, you slept through science class....

Whether you slept through science class due to a lack of interest or an incredibly boring teacher (gasp!), sometimes it's good to catch up on the topics that you missed. I know I’m still trying to catch up on the classic books that I never read.

In the news we constantly hear about genetic mutations, genetic engineering, gene therapy, genetically modified organisms, and a host of other gene-related issues. Many people are still a little fuzzy regarding exactly what a gene is and what it does. Question: what is the definition of a gene? Answer: A gene is a section of DNA that codes for a specific protein.

Each of our cells has a nucleus (a blocked-off space that's separated from the rest of the cell by a nuclear membrane) containing instructions for keeping the cell alive. Inside the nucleus, these instructions are written in a molecule called DNA (just like your car’s maintenance instructions are written in the user’s manual). DNA is a very long molecule; it’s actually two strands that are twisted together into a shape that scientists call a “double-helix.” So, in this long, complicated molecule is a code that tells the cell how to make various proteins (which are built out of smaller molecules called amino acids). One strand of DNA can include the instructions for making many different proteins. Thus, a gene is a section of the DNA molecule that codes for one protein. Chromosomes contain very long strands of DNA that code for many, many proteins. One chromosome contains many genes (hundreds to thousands, depending on the size of the chromosome). Humans have 23 pairs of chromosomes in each cell!

Now we're equipped to deal with the news articles about genetic mutations (changes in genes that don't allow them to make the same protein) or genetically modified organisms (organisms whose genes have been changed by scientists so that they produce alternate proteins). Without understanding scientific concepts, we can’t understand environmental issues about which we have to make lifestyle decisions and vote. I meet many students who consider themselves very “green.” They’re concerned about their impact on the environment, and they’re trying to make changes in their personal lives, as well as through political action. Unfortunately, if you don’t understand the science behind these issues, then “green” is simply an emotional issue. A “green” lifestyle based on emotion only (love for animals, love for the environment, frustration with development or pollution) is doomed to failure. It’s like a marriage that’s based only on the initial flush of emotion when two people meet, rather than a mature understanding and acceptance of one another.

Let’s continue to jump in and learn the basics of environmental science. It’s not rocket science, or I wouldn’t be teaching it, believe me. Basic biology, chemistry, and ecology are within your grasp. Even if you slept through science the first time……
Posted by Desiree at 12:04 PM No comments:

First Meat-Free Friday (Monday, that is...)

Tweet
Let's start simple.  I mean really simple.  Tonight, it's veggie burgers -- store bought veggie burgers.  My family's favorite is Morningstar Farms, either the garden veggie, black bean, mushroom lovers, or tomato basil variety.  Cook according to the package directions and serve with your favorite hamburger buns and toppings.  What to do for a side dish?  We enjoy steamed cauliflower or broccoli  (they're currently in-season) and maybe some lima beans or black-eyed peas.  Ease into the meatless lifestyle.  It's easy and tasty!  At our house, we finish off the meal with a nice bowl of ice cream for dessert!
Posted by Desiree at 10:47 AM No comments: