Every species known to science is named using a taxonomic framework.  Scientists organize and name species to avoid the confusion that sometimes comes from common names.  Just think about the big tan cats that we call puma, cougar, or mountain lions -- their scientific name is Puma concolor.  Scientists sometimes name a species after someone as an honor to that person.  According to an article in the Washington Post today, two Cornell University  entomologists named a slime-mold beetle Agathidium bushi after President Bush.  And now President Obama has a fish!  Fittingly, Tosanoides obama is a small fish found in deep water corals in the Papahanaumokuakea Marine National Monument in the President's home state of Hawaii.

This newly named species puts our presidents in fine company -- David Bowie, Johnny Cash, Angelina Jolie, Bono, and Shakira all have species named after them.  Check out CBS' list.  I'm still waiting for the greenmomster species......

Posted by Desiree at 6:08 PM No comments:

Another reason to love hockey!

It's all hockey, all the time at our house.  The Madison HS Warhawks are undefeated so far this season and we love to rock the red with the Caps!  But here's another reason to love hockey -- the NHL has been named by GreenSportsBlog the greenest sports league of 2016!  Check out the details.
Posted by Desiree at 10:41 AM No comments:

It's Christmas time, so of course, we're thinking about Schweddy balls!  OK, they're not Schweddy balls, but I just discovered dryer balls that make your laundry routine a little more green! Just add a little essential oil, pop these balls into your dryer, and cut down on all of the chemicals and waste associated with dryer sheets.  From BogBerry! (nope, they didn't pay me for this plug -- I was just happy with my purchase) 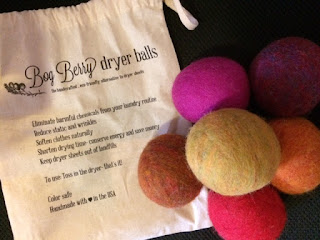 Tweet
This tasty recipe comes from Chloe's Vegan Italian Kitchen, by Chloe Coscarelli.  The only change I made was to add about 1-2 tblsp of red pepper flakes to add a little zip!  Enjoy! 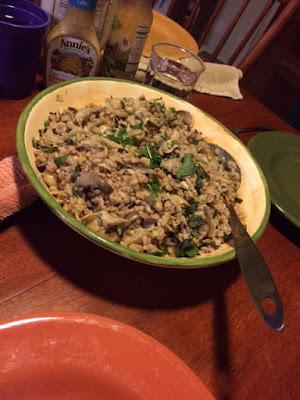 I'm dreaming of a GREEN Christmas! 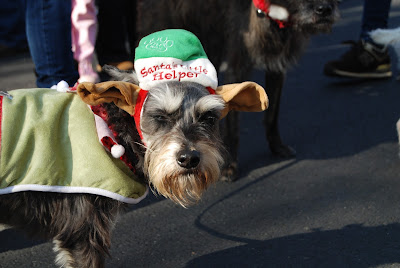 Happy Nikolaus Tag!  Once again we’re dreaming of a white Christmas (it's just raining in VA), but what about a green Christmas?  Four years ago, greenmomster started posting some ideas for making your Christmas celebrations a little more eco-friendly.  Here are some old and new ideas for greening up the holiday!

1)  The wrapping!  Making Christmas gifts festive and fun to unwrap is part of the fun of giving the gifts.  Even the Grinch knew that taking the wrappings might put a damper on things as he left Who-ville:  “he packed up his sled, packed it up with their presents!  The ribbons!  The wrappings! The tags! And the tinsel!  The trimmings!  The trappings!” (XMAS FUN 2012).  But then again, according to Earth911, “wrapping paper and shopping bags alone account for about 4 million tons of trash annually in the U.S.”  None of us wants to be a Grinch, so how can we green up the wrappings?
2)  The tree!  OK, it’s the age-old debate – should we use a fresh tree?  artificial?  tree in a pot to be planted later?  A few thoughts, then you make your own decision:
3) The cards!  I come from a proud line of Christmas card senders and Christmas letter writers.  So how can we green up this annual tradition?
4)  The gifts!  There are actually fun green gifts that don’t lead to forced smiles and insincere “thank yous!”
Want more great ideas on how to green your holidays?  Check outEarthEasy’s tips for green gift giving, wrapping, and lighting.
From the greenmomster’s house to yours, we wish you a very merry and GREEN holiday season!
Sources:
Earth911.  2012.  Facts About Recycling Wrapping Paper.  Accessed 11/29/12.http://earth911.com/recycling/paper/wrapping-paper/facts-about-recycling-wrapping-paper/EarthEasty.  2012.  How to have a ‘green’ Christmas.  Accessed 11/29/12.http://eartheasy.com/give_sustainchristmas.htmGoodHousekeeping.  2012.  Getting an Artificial Christmas Tree!  Choose This Type.  You’ll save resources and reduce risk of toxins.  Accessed 11/29/12.  http://www.thedailygreen.com/going-green/tips/artificial-christmas-trees-buy-americanXMAS FUN.  2012.  How the Grinch Stole Christmas by Dr. Seuss.  Accessed 11/29/12.http://xmasfun.com/stories/Grinch/Text.asp
Posted by Desiree at 9:06 AM No comments:

Tweet
This week’s recipe for Chickpea Curry is adapted from a recipe I found in the January/February 2013 issue of Cooking Light.   It’s easy and quick to make, and even my most finicky eaters enjoyed the dish, despite the fact that it’s got a little kick!