Tweet
This new little film about how to help hedgehogs thrive in the U.K. reminds us of things we need to do here in North America too -- most notably, providing free access to habitat and not creating barriers such as walls and fences. Conservation managers call these free access areas "wildlife corridors" -- you may have seen them near highways.  I've written about the proposed wall along the U.S./Mexico border is an environmental disaster, but removing wildlife barriers is also something we can tackle in our own backyards.  And those hedgehogs really are cute!

Posted by Desiree at 4:51 PM No comments:

Tweet
It's Sea Otter Awareness Week, which means we have to celebrate!  I was born in Carmel, California, and the Monterey Bay area is always a favorite of mine. This week's mammal comes from beautiful Monterey Bay -- it's the sea otter! Did you know,

Posted by Desiree at 7:51 PM No comments:

Tweet
Today is World Rhino Day 2018!  As with many large African species, black rhinos and white rhinos  are threatened by habitat loss and illegal hunting. To save them, conservationists are working hard to coordinate programs with local communities, decrease demand for rhino horn, and even airlift some individuals to safety.  Why should we care? As the World Wildlife Fund's website states:

"In almost all rhino conservation areas, there are other valuable plants and animals. The protection of rhinos helps protect other species including elephants, buffalo, and small game. Rhinos contribute to economic growth and sustainable development through the tourism industry, which creates job opportunities and provides tangible benefits to local communities living alongside rhinos. Rhinos are one of the "Big 5" animals popular on African safaris and they are a popular tourism draw in places like the Eastern Himalayas."

Do you want to help?

Posted by Desiree at 5:40 PM No comments:

Food for Thought on a Sunday 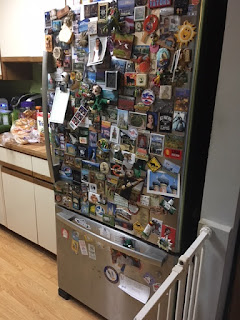 Ever notice how your appliances (and a lot of other things you buy) are not made to last?  This feature of modern manufacturing is a HUGE waste of resources.  We're told to reduce, reuse, recycle, but it's tough to reduce when we're forced to buy new stuff, instead of simply fixing things when they break.  Here's a great opinion piece on the topic:  To a refrigerator dying young.
Posted by Desiree at 1:10 PM No comments:

Tweet
I always find September and May to be super-busy months, thus I need a recipe that super-easy and super-delicious. This recipe works well for a hot dish at dinner or a cold dish for lunch leftovers. It's adapted from one I saw on the Today Show.


Greenmomster's been a little spare on the posts lately, because I've taken on a new job -- I'm now a high school science teacher!  But now I'm back in the saddle, so what better mammal for this Monday that the Przewalski's Horse (pronounced “sheh-val-skee”)! This horse is native to plains and grasslands of Mongolia, as well as other parts of Asia and eastern Europe, but I first saw one at the National Zoo’s Smithsonian Conservation Biology Institute in Front Royal, VA. Although these horses are small (about 13 hands high and between 550 and 750 pounds), they’re impressive with tan fur on their bodies and a short, dark mane and tail. They have evolved to survive the harsh winters in Mongolia, but in the 20th century the species had trouble surviving in the face of habitat loss, loss of water sources to domestic animals, and overhunting. The Przewalski’s horse was declared extinct in the wild by the World Conservation Union in 1970.

Thanks to an active captive breeding program, Przewalski’s horses were reintroduced to the wild in 2008. There are currently 1,500 horses in captivity worldwide, and approximately 400 horses in reintroduction sites in Mongolia, Kazahkstan, and China. All of today’s current population of Przewalski’s horses come from 14 ancestors. Thus, the gene pool for this horse is very narrow. Scientists must very carefully coordinate breeding between the captive horses to try to maximize genetic diversity and make the population more able to withstand various stresses, such as disease.

So Przewalski’s horse is beautiful, but why should we care about its survival? Because a species like this one tells us when we’re negatively impacting the ecosystem. Humans are part of the natural world; we depend on natural resources for our survival. But sometimes we take more than our share, and the ecosystem on which we depend begins to suffer. Species like Przewalski’s horse tell us when our agricultural or hunting practices are unsustainable.

And if you needed more reasons to protect the Przewalski’s horse, here are 5 Reasons Przewalski’s Horses are cooler than thoroughbreds: