I’ve been a fan of Barbara Kingsolver’s books for quite some time.  From Animal Dreams and The Bean Trees through The Poisonwood Bible, I look forward to Ms. Kingsolver’s next book of fiction and often find myself re-reading sentences just to enjoy her writing 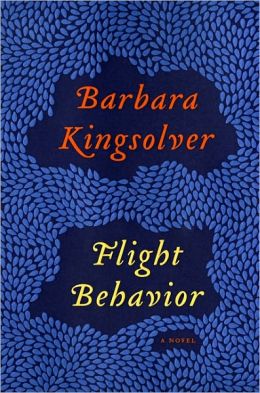 Flight Behavior is Ms. Kingsolver’s latest book about the fictional overwintering of monarch butterflies in southern Appalachia.  As you know from previous posts, monarch butterflies overwinter In the mountains of Mexico after a 5 generation migration through North America.  In Flight Behavior, Ms. Kingsolver introduces us to Dellarobia, a woman who’s life isn’t turning out quite as she planned.  With the unexpected arrival of the monarchs, she learns many new scientific facts, as well as many things about herself and her family.   Ms. Kingsolver skillfully weaves a story about a family, while teaching us the science behind climate change’s effects on global biodiversity.  Although I found Dellarobia’s scientist friend, Ovid, to be a bit depressing and overbearing about environmental issues, I think that’s because all of us who are concerned about these major environmental issues might see a bit of ourselves in him.  He tries to remain positive and upbeat when dealing with children, but finds he has little time for the disinterest or excuses of adults.

As usual, Ms. Kingsolver did not disappoint with this novel.  She chose an unusual method for addressing climate change – through a work of fiction.  She’s done her homework on the subjects of climate change and monarch butterflies, and gets her point across beautifully in this fascinating drama about one woman’s life.
Posted by Desiree at 4:53 PM