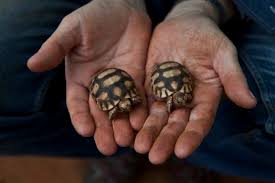 I’ve written several posts in the past regarding illegal wildlife trafficking, including a post on ivory, protection of pangolins and lions, and reviews of books written about illegal trade of reptiles (plowshare tortoise photo from newyorker.com) and butterflies.  Biodiversity conservation is a critical environmental and social issue.  The illegal trade decimates wildlife populations, but also harms human communities.  As stated by Jim Leape, Director General of World Wildlife International, “It is communities, often the world’s poorest, that lose the most from this illicit trade, while criminal gangs and corrupt officials profit. Frontline rangers are losing their lives and families that depend on natural resources are losing their livelihoods.” (WWF 2012)

Want to learn more?  60 Minutes presented a fascinating piece on reptile conservation.  Arkive also provided a great overview of the illegal trade issue on their blog.  Additionally, The World Wildlife Fund recently posted all presentations from a symposium on illegal wildlife trade – definitely worth a view to learn more about this important issue.

If you’re interested in helping to stop the international illegal trade in wildlife, check out how you can participate through World Wildlife Fund.