Sharks on the move! 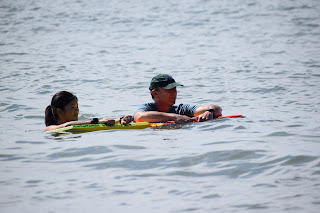 (not too worried about sharks...)

My family loves spending time at Edisto Beach in SC.  The beaches in that area are beautiful and relatively empty -- great places for shell collecting and swimming.  And sharks are an important part of the ecosystem.  We've caught and released sharks right off the coast -- lemon sharks and sharpnose sharks are common.  Now there's news that bull sharks, thanks to warmer waters due to climate change, may be expanding the range of their nursery areas to North Carolina's Outer Banks.  No real danger to humans, because the juvenile sharks don't bite humans and they're in areas that aren't really popular for beachcombers.  But it's still an interesting impact of climate change.  Check out this Washington Post article explaining the change.
Posted by Desiree at 10:27 AM