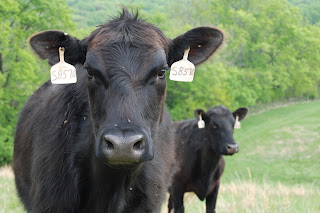 Humans are not good news for large animals.  That's the news from a recent paper in the journal Science.  "Body size downgrading of mammals over the late Quaternary" matches up the extinct of various large mammals with the movement of humans throughout history.  It turns out, when humans showed up, large mammals disappeared.  This trend is continuing today with the loss of elephants, rhinos, wolves, whales, etc.  This finding is important, because when we lose "megafauna", it's not just the species that we lose.  Rather, the entire way that an ecosystem functions can be altered.

One example of this ecosystem response to the loss of a large mammal species can be seen in Yellowstone.  After the loss of wolves in this ecosystem, scientists noted that elk became more prevalent, diversity of vegetation changed, and species such as beavers declined significantly.  Since the reintroduction of wolves to Yellowstone, the ecosystem is beginning to change back to its original structure.

Many large species are on the endangered species list.  Since humans have long caused this change in biodiversity, how does the situation differ today?  We now have the ability to study and change our impact, rather than allowing cows to become our largest mammals.
Posted by Desiree at 10:58 AM