In case you missed it….. 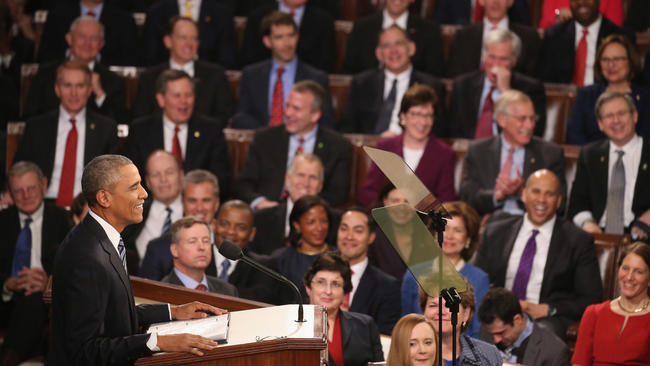 (photo from the LA Times, www.latimes.com)

Here’s what President Obama said about climate change during last night’s State of the Union address:

“Look, if anybody still wants to dispute the science around climate change, have at it. You’ll be pretty lonely, because you’ll be debating our military, most of America’s business leaders, the majority of the American people, almost the entire scientific community, and 200 nations around the world who agree it’s a problem and intend to solve it.

But even if the planet wasn’t at stake; even if 2014 wasn’t the warmest year on record — until 2015 turned out even hotter — why would we want to pass up the chance for American businesses to produce and sell the energy of the future?

Seven years ago, we made the single biggest investment in clean energy in our history. Here are the results. In fields from Iowa to Texas, wind power is now cheaper than dirtier, conventional power. On rooftops from Arizona to New York, solar is saving Americans tens of millions of dollars a year on their energy bills, and employs more Americans than coal — in jobs that pay better than average. We’re taking steps to give homeowners the freedom to generate and store their own energy — something environmentalists and Tea Partiers have teamed up to support. Meanwhile, we’ve cut our imports of foreign oil by nearly sixty percent, and cut carbon pollution more than any other country on Earth.

Now we’ve got to accelerate the transition away from dirty energy. Rather than subsidize the past, we should invest in the future — especially in communities that rely on fossil fuels. That’s why I’m going to push to change the way we manage our oil and coal resources, so that they better reflect the costs they impose on taxpayers and our planet. That way, we put money back into those communities and put tens of thousands of Americans to work building a 21st century transportation system.

None of this will happen overnight, and yes, there are plenty of entrenched interests who want to protect the status quo. But the jobs we’ll create, the money we’ll save, and the planet we’ll preserve — that’s the kind of future our kids and grandkids deserve.

Climate change is just one of many issues where our security is linked to the rest of the world.”

I like that the President dismissed climate change denial, and connected a clean energy future with a strong economy.  Here’s a link to the entire speech.