What’s going on in those boxes?

Nesting season is underway!  Here’s a repost of an article from last summer – in case you’ve been wondering what’s going on in those boxes!

Last week, I posted about what’s happening in those squirrel nests this time of year – this week, let’s look at bluebird boxes.  This is the time of year when life for cavity nesting birds gets exciting!  I recently had the pleasure of spending a morning with a local expert on bluebirds – my fellow Sky Meadows State Park volunteer, Margaret.  She showed me who’s living in those bluebird boxes we often see on the sides of fields and explained the various survival strategies of these fascinating birds.  You’ll often see bluebird boxes that folks have set up along the edges of fields and forests. 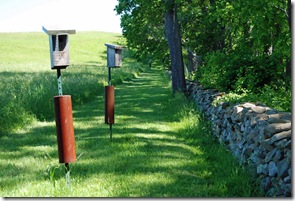 Bluebirds use these boxes for nesting in the spring and summer (they can raise several clutches of young each year), but they also use the boxes in the winter to group together with other adults to keep warm.  Bluebird nests are tidy and feather-free 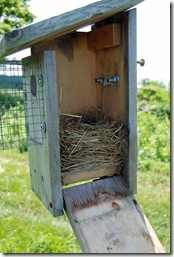 , and the adults create a little cup in the nest to hold the eggs 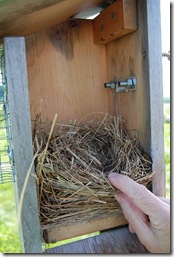 .  Bluebird diets are also fascinating – they’re omnivorous, but the ratio of meat to veggies changes by the season.  During the winter, bluebirds survive on vegetation (berries, etc) with a lesser proportion of insects.  During the spring and summer, when the young need lots of protein, the proportions flip-flop – the bluebirds chow on LOTS of insects (at least 70% of their diet).

When you look at rows of bluebird boxes, you might notice that the boxes are grouped in pairs with substantial space between the pairs.  That’s because bluebirds are territorial; they won’t tolerate having another breeding pair close to their box.  But they will tolerate tree swallows as next door neighbors – thus the pairing of the boxes.  Tree swallows, a migratory species, also like to use these nesting boxes in spring and summer. 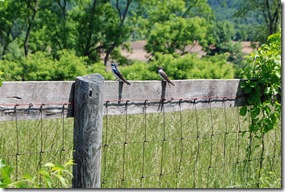 Tree swallows raise only one clutch each season.  It’s easy to tell tree swallow nests from bluebird nests, because tree swallows place feathers in their nests. 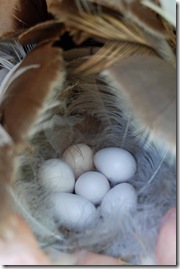 When these little guys first hatch, they’re helpless and blind. 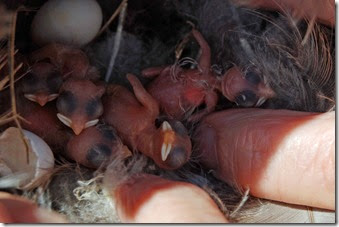 After care from the parents, they mature until they’re ready to fledge! 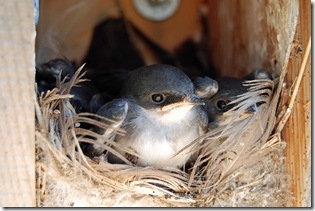 Margaret also taught me that sometimes the nest boxes receive unwanted visitors – house sparrows, which are an invasive non-native species.  Their nests are distinctly different from bluebirds and tree swallows – note the height and use of grasses with seed heads. 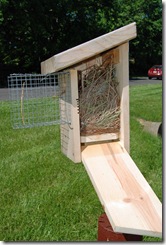 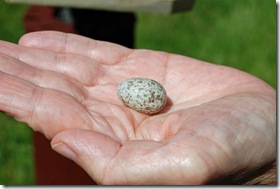 So what do the bluebird enthusiasts do when sparrows invade?  They simply remove the eggs and replace them with fake eggs – that way, the sparrows just keep putting their energy into raising the “eggs” and don’t bother any other bluebird boxes.  A creative solution!

So much going on in those nest boxes you see as you’re driving down the road!  For more information, be sure to check out the North American Bluebird Society or the Audobon Society.