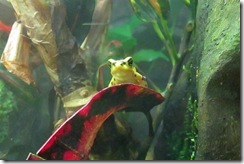 Every week, greenmomster includes an “endangered species of the week.”  But what exactly do we mean by “endangered species”?  Usually when we refer to an “endangered species,” we’re referring to a species that has been listed as “threatened” or “endangered” under the Endangered Species Act (ESA), a law passed in 1973 when Richard Nixon was president.   The goal of the ESA is to “protect and recover imperiled species and the ecosystems upon which they depend.” (USFWS 2013).  The law has been very successful over the past 40 years, with under 1% of the 2054 internationally listed species (1,436 are found in the U.S.) going extinct during that time (Defenders of Wildlife n.d., USFWS 1/2013).   The law is administered by both the U.S. Fish and Wildlife Service (USFWS) (they usually handle terrestrial and freshwater organisms) and the National Marine Fisheries Service (NMFS) (they usually handle the marine species).  Here are a few facts about how the law works: