This week, I’m grateful for gorillas and the good news about their protection!  The western lowland gorilla (Gorilla gorilla gorilla – see photo), is a relatively small gorilla (4-5 1/2 ft tall and up to 440 lbs) that lives in the dense rainforests of Cameroon, the Central African Republic, the Democratic Republic of Congo, 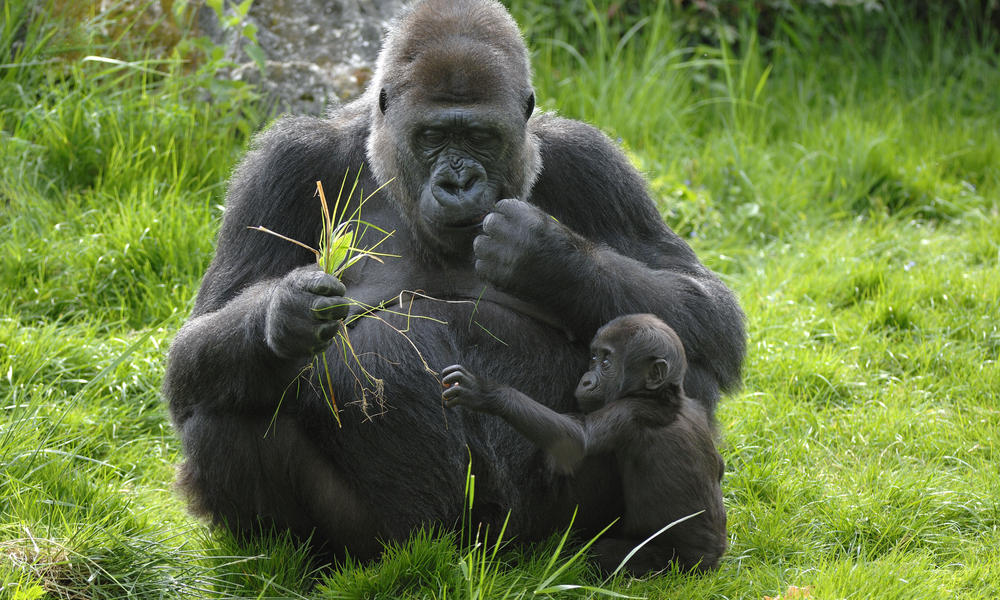 Equatorial Guinea, Gabon, and the Republic of Congo.  The mountain gorilla (Gorilla beringei beringei) is also a smaller gorilla that lives in mountainous regions with altitudes of  8,000 to 13,000 feet in the Democratic Republic of Congo, Uganda, and Rwanda.  The mountain gorilla’s fur is thicker than that of its lowland cousin, but both have a primarily herbivorous diet and live in complex social groups.  About half of the mountain gorilla population (estimated at about 700 individuals (National Geographic 2012) is found in the Bwindi Impenetrable National Park in Uganda.

The western lowland gorilla sub-species is critically endangered.  Exact population numbers are not known, because it’s so difficult to get into their habitat.  What is known is that the population seems to have decreased by up to 60% in the last 20 to 25 years.   Threats to the lowland gorillas include poaching and disease (the Ebola virus).  The good news is, as reported by World Wildlife Fund on October 11, the Republic of Congo announced that it will designate over 7 million acres of wetland areas such as marshes, wetland forests, and lakes to protect the western lowland gorilla and other species such as chimpanzees, African elephants, and hippos!  This brings the total protected wetlands acreage in the Republic of Congo to 29 million – about the size of Ohio!

The mountain gorilla is also critically endangered, threatened by war, habitat loss, disease, poaching, and charcoal making.  But there’s good news here too!  The World Wildlife Fund reported on November 13 that “a recent census by the Uganda Wildlife Authority identified 880 mountain gorillas, an increase from the 786 estimated in 2010.” (WWF 2012 Mountain Gorilla).

Why are gorillas worth saving?  Well, to start, they’re our distant cousins who use tools and live within complex social structures.  If you need an ecological or economic reason, here they are:  as stated in Wildlife Heroes (2012), “Due to the large quantities of plant matter they consume, gorillas play an important role in the shaping of plant and forest environments.  Tourism to view gorillas in their wild habitat is an important part of the range country economies, bringing millions of dollars each year into Rwanda, Uganda, and Democratic Republic of Congo.”

What can you do to help?  Go to the World Wildlife fund website or check out this list of organizations working to protect the gorillas and their habitats.