This week’s endangered species is the Red Knot (Calidris canutus rufa), a small bird with a 20 inch wingspan that makes an incredible migration each year.  According to the U.S. Fish and Wildlife Service (FWS) and the FWS status assessment report, the Red Knot migrates approximately 9,300 miles each year, from Tierra del Fuego north to its breeding grounds in the central Canadian arctic, and then back again!   Upon reaching the breeding grounds, the birds form breeding pairs and establish nesting territories.   Like piping plovers (discussed in an earlier post), the Red Knots create nest scrapes and lay usually 4 eggs per nest over 4 to 6 days.  After the eggs hatch (about 22 days later), the female abandons the brood, while the male remains with the chicks in wetlands habitats until after fledging (about 25 days after hatching).*

Red Knot populations are currently very depleted and the Calidris canutus rufa was named as a candidate for Endangered Species Act protection in 2006.  When Red Knots migrate, they make several stops along the way, in 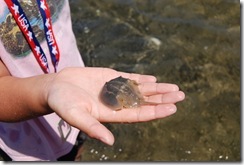 order to “fuel up.”  These feeding stops are critical to the survival of individual birds during the migration, breeding, and wintering.  One of the major “pit stops” for the red knot is the Delaware Bay, where the birds feast on high-protein horseshoe crab eggs.  Since the 1990s, the horseshoe crab population has declined, due to increased use of horseshoe crab eggs in the conch and eel fisheries.  This decline in horseshoe crab eggs is believed to be a primary reason for the at least 50% drop in Red Knot population.  Fishery closures and declines, as well as beach closures and exclosures to reduce competition from gulls, are some of the actions being taken to protect the Red Knot.  Unfortunately, one of the other suspected threats to the Red Knot, warming temperatures in its breeding grounds, won’t be addressed until we get serious about climate change.*

If you’d like to learn more about the red knot and horseshoe crab, be sure to check out this terrific program by PBS/Nature.

Watch Crash: A Tale of Two Species on PBS. See more from Nature.

*  U.S. Fish and Wildlife Service.  May 2007.  Status of the Red Knot (Calidris canutus rufa) in the Western Hemisphere.