5 Reasons to save the Delmarva Fox Squirrel 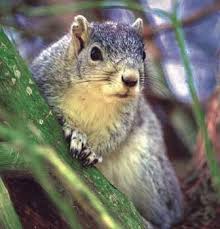 historically found all along the Delmarva peninsula.  According to the species recovery plan, it’s now down to just 10% of its historical population (it was listed as federally endangered in 1967).  It is currently found in eight counties on the Eastern Shore of Maryland (all but Cecil) and Sussex County, Delaware and Accomack County, Virginia (from U.S. FWS Species Profile).  What’s causing the decline of this species?  I know I’m sounding like a broken record in these endangered species posts, but once again, the main culprit seems to be habitat fragmentation and loss.

According to the Chesapeake Bay Field Office of the U.S. Fish and Wildlife Service, the fox squirrel likes to live in old growth hardwood and pine forests, eating nuts or mature green pine cones.  During the spring, these squirrels add a little variety to their diets in the form of buds, flowers, fungi, seeds, and even insects.  Delmarva fox squirrels prefer to live in dens in hollowed-out trees, but will build nests in the branches of trees, much like the more familiar gray squirrel (Sciurus carolinensis).   Delmarva fox squirrels breed in the late winter and early spring; after a 44 day gestation, they give birth to a litter of up to 6 squirrels between February and April.

Here are 5 reasons to save the Delmarva Fox Squirrel:

1)  By preserving the forests on which these squirrels depend, we’re also helping many other, less charismatic but equally important, species

3)  Species such as the Delmarva fox squirrel, that move and eat seeds and nuts, help to maintain forest ecosystem health and reproduction

5)  Oh my gosh, how cute are these little guys?