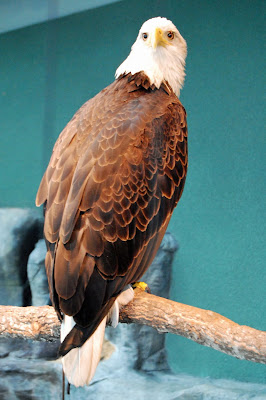 For Memorial Day, we’re going to take a look at an endangered species success story – the bald eagle (Haliaeetus leucocephalus)! Who doesn’t love seeing our national symbol (since 1782) flying majestically through the skies? I know that one of the high points of our recent visit to Chincoteague NWR was seeing the beautiful bald eagle fly above us as we biked the island. But views of bald eagles weren’t always so common. According to National Geographic News, there were only 417 nesting pairs in 1963. Many attempts were made to try to protect bald eagles, including the 1940 Bald Eagle Protection Act and listing under the Endangered Species Act of 1973, but it was the banning of DDT that really helped the recovery of these birds.

DDT was a commonly used insecticide in the 1950s and 1960s. Insects had the DDT in their systems, and fish then ate the insects. Eagles then ate the fish. As we move up the food chain (insect to fish to eagle), more and more of the insecticide would accumulate in the tissues of each animal (ie. an insect has a little insecticide; fish eat many insects, thus their tissues have more insecticide; eagles eat many fish). This phenomenon is called “bioaccumulation”. DDT caused the eggshells of eagles to soften, so young would not survive. Thanks to the banning of all hunting of eagles and of all use of DDT, we can enjoy seeing our national bird today and everyday!