It's almost time to go back to school -- What I did, and read, on my summer vacation! 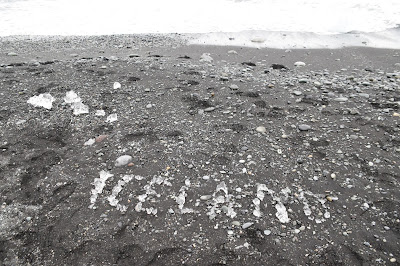 Iceland is a chilly place!  As I explored southern Iceland from the west coast to the east at the beginning of August, the temperature never hit 70 degrees F.  I drove through the vast, open wilderness and noticed that the landscape looked somewhat similar to one of my favorite places in the U.S. -- New Mexico.  But the instant I left the car, I knew I was in Iceland.  The wind that blows across Iceland is MUCH colder than the wind that blows across New Mexico in August. 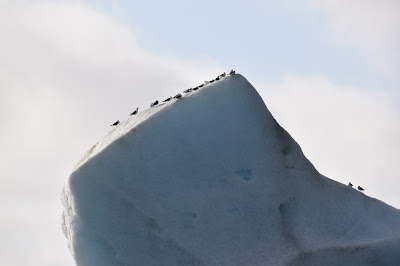 As I drove across chilly Iceland, I couldn't help but think about a rather odd topic -- warming.  Global warming, that is.  While playing with puffins at an aquarium, I spoke with people in the Westmann Islands who told me about a wetter than usual spring.  Was this just a weather event or is the climate of the Westmanns getting wetter?  I chatted with researchers who were investigating the distribution of orcas in the frigid water around Iceland. I wondered what would happen to the orcas and minke whales that I saw as the ocean absorbs more heat and CO2 in the future.  As I hiked up to huge glaciers and gazed down on the glacial lagoons, I remembered reading national park signs describing the 5-meter annual loss of the glaciers leading to larger lagoons and downstream flooding.  I felt fortunate to visit Iceland right now, and I'm curious to see what it will look like in 20 or 30 years. 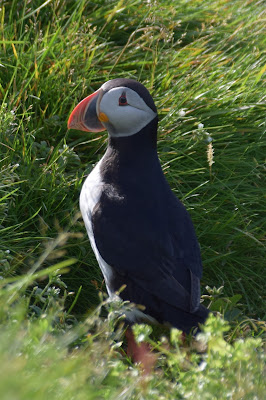 Planning for my trip to Iceland involved proper clothing selection (that would be lots of layers, since I'm a warm weather gal) and a few other items (but not too many, since I was flying on no-frills WOW airlines).  One must-have is a book. As every avid traveler knows, you've got to bring along a good book when you travel.  Playing solitaire on your phone or scrolling through instagram for hours during a long car, ferry, or plane ride just won't cut it.  Just before leaving on my trip to Iceland, I attended a book signing by Dr. David Goodrich who retired as head of NOAA's Climate Observations and Monitoring Program, and served as the Director of the U.N. Global Climate Observing System in Geneva, Switzerland.  For my Iceland trip, I brought along Dr. Goodrich's book, A Hole in the Wind.  As I made my way across Iceland, I enjoyed Dr. Goodrich's story of his cross country (U.S.) bicycle trip (actually, several of his long-distance bike trips).  Throughout the book, Dr. Goodrich skillfully weaves together biking adventures, history, and climate change stories.  Each evening, after exploring a new wonder in Iceland, I enjoyed reading Dr. Goodrich's entertaining tales about the people he met.  I also enjoyed learning about climate change from an expert, because Dr. Goodrich provides the facts about climate change in a non-threatening but informative manner.  As my travels and the book drew to a close, I was inspired by the author's hopeful outlook.  One of my kids once told me after meeting folks at a polar plunge environmental fundraiser, "these environmental activists deal with one of the most depressing topics, but they're the most positive people I know!"  Dr. Goodrich is one of these positive people, which is why I highly recommend A Hole in the Wind to anyone looking for an entertaining yet informative read.  The final section of the book is titled, "A Case for Hope", and Dr. Goodrich states, "It's a great battle, but one that's been won before.  More than a battle, it's an opportunity."