The Push and Pull of Population Problems 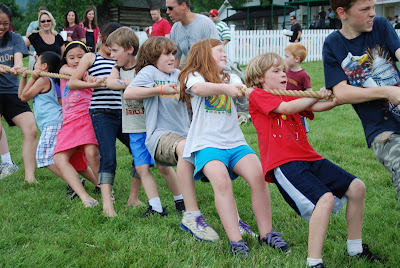 Back in the '80s, I took a sociology course at the College of William and Mary called "Population Problems" which I found fascinating.  The questions about human population, its current size, and future growth have been hot topics for well over 35 years.  The current human population is estimated at approximately 7 billion; human population is expected to top out at about 9 billion during the 21st century.

How do demographers know how many people to expect in the coming decades?  They use tools called "age structure diagrams" which show how many people are currently alive in various age groups.  Age structure diagrams can be used for cities, states, countries, or the entire world.  They basically allow us to see how many new people will be added to a population, depending on how many children each female has in her lifetime.

In addition to using up Earth's finite (yup, finite) resources, the number of humans on Earth also affects climate change.  An article in The Guardian this week reported on a study which found that having fewer children, or slowing population growth, is the personal strategy that has the biggest impact on slowing climate change.  The next best actions or strategies included living car-free and eating a vegetarian diet.  This study re-enforces what environmental experts have been saying for decades -- not a lot of new news here.

But just as the news about human impacts on resources and climate change are nothing new, neither are the nay-sayers.  The Washington Post this week published an opinion piece by Christine Emba in response to the Guardian article.  The opinion piece includes much mis-information that has been circulating for decades.  I am re-publishing this article here with my comments inserted to try to clear up the facts.


The overpopulation doomsayers are at it again. And they’re still wrong.

Children are ruining the world, according to this week’s reporting at least. Greenmomster: The report did not say that children are ruining the world. The report stated that information regarding human carrying capacity and impacts on climate change is simply not being reported. The researchers found that environmental education focuses on much less effective means of controlling climate change, rather than focusing on the most effective means. The overpopulation doomsayers are at it again. Greenmomster: I'm assuming that the author is referring to the book, The Population Bomb (written several decades ago), which did indeed overstate population issues.


On Monday, France’s bright-eyed new president, Emmanuel Macron, found himself in hot water after a Group of 20 news conference in which he soliloquized about Africa’s “civilizational” challenges, including women who “have seven or eight” children.


On Wednesday, the Guardian published an article headlined “Want to fight climate change? Have fewer children.” That was its take on a newly published study suggesting governments and other influencers don’t spend enough time promoting the “most effective” (in terms of tonnage of carbon dioxide emissions avoided) personal strategies for climate mitigation: living car-free, avoiding airplane travel, eating a plant-based diet and, yes, having one fewer child. Researchers calculated that in the West, at least, choosing not to have an additional child meant a reduction of 58 tons of carbon dioxide emissions per year. Greenmomster: indeed, this is what the researchers stated. Nothing about children ruining the world.


There’s no doubt these arguments come from a place of sincerity, based on real concerns for the future. Yet the natural response also seems the correct one: You can’t be serious. Greenmomster: No that is not my natural response, and yes, I am serious. There are many reasons why people choose to have a certain number of children.  The health of the planet and the survival of future generations might very well be two of those reasons.


Demographic transitions are not without their difficulties. Growing populations can strain resources; an abundance of youths lacking opportunity can lead to instability. But increases in wealth and women’s education tend to lower fertility over time on their own. Greenmomster: This is exactly correct. As women's educational levels and family incomes increase, we see lower fertility levels. So what, exactly, are we recommending here? If not something akin to China’s heavy-handed demographic disaster, perhaps more countries that, like the French Republic Macron himself represents, are slouching toward sterility? Greenmomster: We are suggesting neither. As the author states in this opinion piece, the choice of family size is a deeply personal one based on many factors. No one is suggesting a draconian policy ala China's one-child policy. But neither are we suggesting burying our heads in the sand. What most demographers and environmental scientists suggest is increasing women's educational levels and family incomes throughout the world to help achieve a goal of a stable human population size. I suggest the author take a look at this TED talk. The suggestion that the rest of the world should hurry to imitate our way of life may not be as appealing as we think.


And then there’s the environment. To be clear: Climate change is real, is significantly influenced by human activity and is a problem of steadily increasing importance. If the near-100-degree weather in Washington this week did not agree with you, a Washington several degrees warmer in the coming decades will probably please you even less.


Yet solving the carbon dioxide emissions crisis will be more difficult than wishing away your oddly fecund neighbor’s fifth child. (And, yes, they see the way you look at their larger-than-average family when they’re in line at the grocery store.) Greenmomster: Wait. What? Did anyone proofread this opinion piece? No one is "wishing away [his] ......neighbor's fifth child." The discussion concerns the decision about family size. If you see me looking at you funny in the grocery store line, it's probably because one of the five kids is about to fall out of the cart or beating up his sibling. If that's not happening, you're just seeing my resting Kanye face -- I've got my own stuff to ponder, thank you very much. The culprit behind the greenhouse gases accumulating in the atmosphere is less the child himself than the consumption ramped up alongside the child: the resources that wealthy (and usually Western) parents demand and the corporations they enable. Having one fewer child — or haranguing those who choose not to — won’t shut down ExxonMobil, reverse the Industrial Revolution or even push our president back into the Paris climate accord. Greenmomster: The writer is exactly right -- the issue isn't the absolute number of people; it's their consumption level. So I'd like to follow up with a question -- how has the author cut her consumption lately? Did she give up any overseas trips this year? Does she own a car? Does she eat meat? And even if the answer to all of those questions is "yes", that's still not enough to slow climate change significantly if she lives in a "developed" country. Is she planning to scale back her consumption to the levels of the average citizen of Kenya or Peru? If so, can she guarantee that her offspring -- as many as she wants to have -- will also limit their consumption to developing world standards?


Of course, this much is obvious. And of course there’s the obvious reply: “Well, if everyone did it, it just might work.” But funnily enough, that never quite seems to pan out. Greenmomster: It's sad when someone, whom I presume is much younger than I am, has such a jaded outlook on life and our potential for improving the world.


After all, Western finger-waggers seem to have no compunction with traveling around the world to expand their families by any means necessary, pursuing anything from expensive (and no doubt resource-intensive) fertility treatments to surrogacy in the same countries where they urge citizens to contracept more fervently. Greenmomster: I'm not sure how many "finger-waggers" the author has met, but the people who limit their fertility for environmental reasons are not the folks who are trying to build a family through fertility treatments or surrogacy. These are two different groups of people. And by the way, I think adoption is a great option -- here's my earlier post on the topic.


When the enlightened advocates among us hand down recommendations, one has the nagging feeling that they’re envisioning less themselves and their compatriots than more easily caricatured others — the poor, the black and the brown, those Third World women whose lives, they imagine, are sad and difficult anyway, who would probably welcome having one or two fewer children. Greenmomster: untrue and again insulting. Many environmentally aware folks choose to limit their own fertility and do not just point at "the poor, the black and the brown." I am one of those people. It’s an ugly sort of paternalism, well-meant but fundamentally chilling. At its core, it denies the humanity of others. Greenmomster: Again. Wait. What? On what evidence does the author base her statement, that is -- anyone who encourages a slowing of population growth is a paternalistic racist? Climate change will most harshly affect the poor, both in the U.S. and in the Third World (think about Bangladesh). The people of Kiribati don't see a plan to curb climate change as "an ugly sort of paternalism." Never heard of Kiribati? Time to do your homework -- here's a primer.


But the deepest argument, perhaps, is more philosophical than scientific. It’s the rare person who isn’t saddened by environmental degradation. We all want to make the world a better, more liveable place. But children are not interchangeable widgets that we choose one more or one fewer of according to the dictates of emissions efficiency. For whom are we scrambling to save the planet, if not future generations? What is the world if there’s no one to live in it? Greenmomster: No environmental scientist is suggesting that children are "interchangeable widgets". Let's remember that, as citizens of Planet Earth, we are all on the same team. We want to hand to our children a healthy environment with resources for all. I agree with the writer that we must reduce consumption, but I also know that we greatly stress the environment when we allow the world's human population to soar over 9 billion. I've committed to lower fertility and a vegetarian lifestyle, along with other lifestyle choices. What is the author's commitment to the goal?