The National Zoo announced earlier this week that Mei Xiang has given birth to twin pandas!  This is the third time she’s given birth, but it’s going to be a bumpy ride – pandas usually don’t nurse both twins, so the zoo staff will have to employ some creative techniques over the next few weeks.  Fortunately, the National Zoo staff recently successfully raised a sloth bear cub, so they can use that experience in this situation. (Photo: Tallie Wiles, Smithsonian's National Zoo).

Although pandas are cute, why should we care about a panda birth and the conservation of this species?  Pandas are endangered in their native habitat of China, Viet Nam, and Myanmar.  They’re currently only found on a few mountain ranges in China.  In 2004, the wild population was estimated at roughly 1600 individuals.  The major threats to pandas are habitat loss (as is the case with many species) and habitat fragmentation.  Since pandas eat primarily bamboo, they used to migrate whenever they needed to search out new sources of bamboo. Since their habitat is shrinking, this migration becomes harder and harder.  (Arkive.org)

The fact that pandas eat bamboo is one of the main reasons conservation professionals want to save them.  As the pandas dine (and if you’ve ever watched them chomp endlessly on bamboo, dine they do!), they help to spread seeds and keep the bamboo forests healthy.  Many other species, such as the crested ibis, golden snub-nosed monkey, and dwarf blue sheep depend on this type of habitat.  (WWF 2015)

But there’s another reason we should save the pandas, as the World Wildlife Fund states on their website:

“We should do everything we can to save the giant panda because we are the ones that have driven it to the edge of extinction. And because we can.” (WWF 2015) 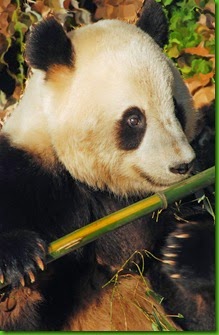 World Wildlife Fund. 2015. Why should we save the giant panda?  Retrieved on 8/26/15 from <http://wwf.panda.org/what_we_do/endangered_species/giant_panda/panda/why_we_save_the_giant_panda/>