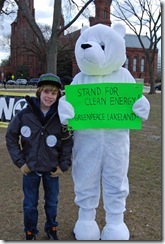 My son and I made our climate change-themed buttons, charged the camera batteries, dressed warmly, and packed a small backpack – we were ready for the big Climate Change Rally on the Mall in Washington DC!  We boarded metro and rode into DC with several other groups, 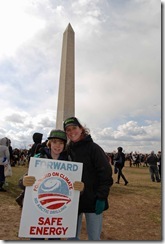 including student groups from George Mason University and Northern Virginia Community College, and the Great Falls Chapter of the Sierra Club.  As we emerged from our underground metro tunnel, the cold wind hit my face and my heart began to sink.  The crowd just didn’t look as big as I thought it should be.  Granted, my son and I arrived early for the rally, but I couldn’t help thinking, “Oh no, not again.  Another lukewarm crowd for this important issue.”  Maybe the naysayers were going to be right.

Forcing a smile, my son and I started walking toward the Washington Monument grounds.  As we walked straight into the very cold wind, I noticed we were being joined by groups coming from all directions, exiting Metro and tour buses, holding signs, and wearing buttons.  By the time we reached the monument grounds, the crowd seemed significantly bigger.  Looks like folks were going to take this rally seriously!

My son and I circulated through the crowd.  We took pictures of the enthusiastic and sincere participants and were impressed at the distances folks had travelled – New York, Ohio, Santa Cruz, Montana, Canada!  The crowd included citizens of all ages and ethnic groups.  Religious groups were also well-represented – Catholic nuns, Quakers, Jewish congregations.  By the time the speeches began, the head count was roughly 30,000 souls.  My favorite speaker was Bill McKibben, the tireless leader of 350.org.  He’s no newcomer to this cause, and his absolute optimism lifts the spirit of an ol’ greenmomster like me.  I also had the pleasure of meeting some folks I’ve followed through their blogs, including the moms from Moms Clean Air Force.  By the time my son and I were completely frozen and ready to enjoy a little lunch at the National Museum of the American Indian (nothing like fry bread to warm the body and soul of a climate change activist), the crowd was estimated at 35,000!  Truly a wonderful turnout – and hopefully one with a message that President Obama and our national leaders will take seriously.  Let’s keep the pressure on our elected leaders!

Enjoy a few photos from the day: 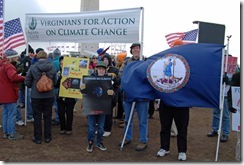 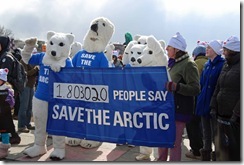 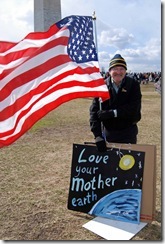 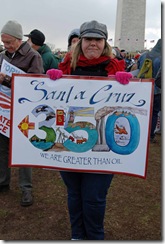 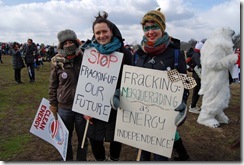 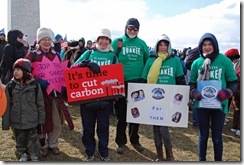 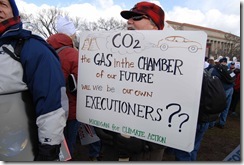 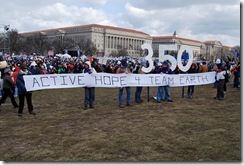 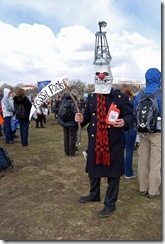 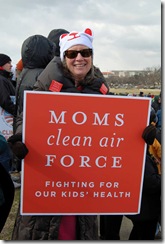 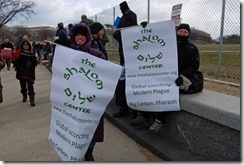 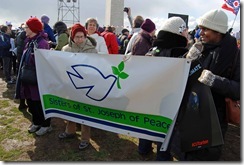 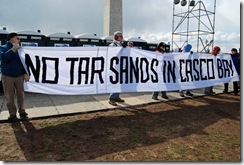