This week’s endangered species is the cuban crocodile (Crocodylus rhombifer)(photo:  D. Di Mauro, National Zoo).  Recognizable by the yellow and black speckled pattern on their backs, these crocodiles are found only in the Zapata swamp, a one-million acre wilderness in southeastern Cuba, and the Lanier Swamp on the Isla de Juventud. 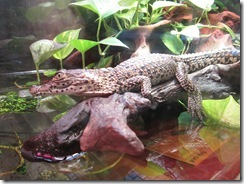 Found primarily in freshwater areas, these crocodiles feed on a multitude of prey including small mammals, birds, reptiles, and many invertebrates.  Turtles are one of their primary prey, and they have special back teeth that they use to crush turtle shells.  Although their lifespan in the wild is unknown, they’ve been known to live up to 75 years in zoos.  The species is threatened by habitat alteration and loss, hunting, and competition from caimans (another member of the alligator family).

Although the species is listed as critically endangered on the IUCN’s red list, there is some good news – the population in the Zapata swamp has rebounded to 3,000 to 6,000 individuals.  Want to learn more about crocodiles of all types?  Check out Crocodilians, Natural History and Conservation website.