Aloha to this week’s endangered species!

This week’s endangered species is the Oahu Elepaio (Chasiempis sandwichensis ibidis), a small (12.5 grams) subspecies of monarch flycatcher found at elevations of 325 to 1800 feet on the Hawaiian island of Oahu (photo from pacificrimconservation.com).  Adult birds form breeding pairs for a season, and it’s 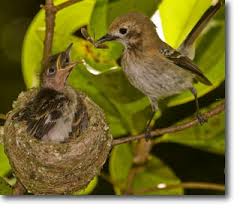 not unusual for pairs to remain together for several years.  In 2001, it’s population was estimated at less than 2000 individuals.  Threats to the species include predation by non-native black rats, low reproductive potential, disease, and fire.

A scientist recently made an interesting discovery regarding coevolution between species, using the little Oahu elepaio (Vanderwerf 2012).  Since black rats, an introduced non-native species, eat the elepaio by climbing up to its nest, the scientist wondered whether  he would see an increase in the height of the bird nests over time.  He studied the birds and their nests from 1996 to 2011 and measured the average height of the bird nests.  Sure enough, over the 16 year period of the study, average nest height from the ground increased from 7.9 meters to 12.0 meters – a pretty significant change!  So were the individual birds learning to build nests higher for more success?  It doesn’t seem that way – Vanderwerf (2012) states, “there was no net change in height of sequential nests made by individual birds, which means individual elepaios have not learned to place nests higher.”  Rather, it seems that nest building behavior might have a genetic link, making the birds with a genetic predisposition to building higher nests more successful in breeding.  The author suggests that rat control could help with conservation, because “it may facilitate the evolution of nesting height by slowing the rate of population decline and providing time for this adaptive response to spread throughout the population.” (Vanderwerf 2012)

An endangered species AND a lesson on coevolution – two for the price of one this week!