Tweet
Pin It
Here’s an easy split pea soup recipe that I’ve adapted from a recipe found in the February 2012 edition of Family Circle magazine.  Not only is it a tasty soup, it uses that hand blender you got for Christmas!  Serve the soup with some bread and a salad, and you’ve got a great Friday night meal!  I usually double this recipe and freeze what’s 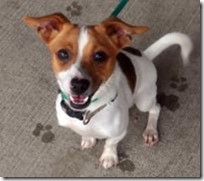 left over (which isn’t much in our house).

Instructions
1)  Microwave the veggie bacon strips until they’re crisp.  Put aside.
2)  Heat olive oil in a large pot.  Add onion, carrots, celery, and garlic and saute until the onion is clear.
3)  Stir in the peas, vegetable broth, 2 cups of water, and the rosemary.  Bring to a boil, then reduce heat and simmer until the peas are soft (at least 40 minutes).
4)  Using a hand blender, blend the soup until most of the ingredients are pureed, leaving some of the ingredients chunky.
5)  Season with salt and pepper.  Crumble veggie bacon strips and add them, cooking for an additional 5-10 minutes.
Posted by Desiree at 1:40 PM