Since we’re just back from our trip to Edisto Island SC, I’m re-running an endangered species of the week:  the loggerhead turtle.  Every year, the highlight of my visit to Edisto State Park is the evening we accompany the state park staff as they check the turtle nests. 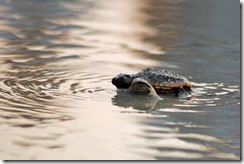 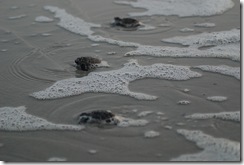 As I described in my post from last year, after the park personnel have logged how many eggs have hatched, how many turtles didn’t make it, and how many live turtles were found, we get to witness the turtles heading for the ocean!  Here’s how I described watching the turtles on the beach:

“The park staff instruct us to stand in two parallel lines from the nest to the ocean.  They release the little hatchlings, and we watch them scuttle towards freedom.  I’ve seen baby turtles countless times, making their way to the ocean, in nature films.  Cute as that is, nothing compares to watching them in person.  Those flippers that make it look like they’re flying through the water aren’t quite as graceful on land.  The hatchlings struggle to make their way across the sand, getting knocked on their backs by the waves, flipping back on their stomachs, and starting again toward the ocean.  We humans have to stand still to avoid accidentally touching or stepping on the hatchlings.  What an incredible sight to witness as the sun sets on Edisto beach!”

All data gathered on the turtle nests, as well as other interesting information about ongoing turtle research (even genetic research that determines which turtles returned to which beaches) can be found on the sea turtle website.  Specific data on the Edisto Beach population is also there.  The turtles and the programs that support their survival need your help.  Can’t make it to a turtle nesting beach this summer?  You can adopt a turtle or adopt a nest – what a great way to help protect these magnificent creatures!