Tweet
Pin It
This morning, the news reported the results of a Quinnipiac poll that reported that more than 50% of respondents stated that "America has lost its identity." I must say, I heartily disagree with that statement.

I picked up my copy of the Washington Post the other day and noticed an article about environmental activists in countries like Honduras, Peru, and Costa Rica.  As the title of the article states, death is a constant companion for these citizens.  For many people in lesser developed countries, fighting for environmental justice can be deadly.  Frequently the activists are lower income or indigenous people.  Two-thirds of those killed for standing up for their rights live in Latin America.  Following is a graphic from the Washington Post article that gives you a feel for the danger involved in speaking out on environmental issues in Latin America. But the violence isn't just occurring in Latin America.  Nobel prize winner Wangari Maathi wrote about her struggle to protect Kenya's forests in her book Unbowed, and many other unsung heroes fight to protect wildlife from poachers everyday.

As I was thinking about how fortunate we are to live in a country where speaking out doesn't usually endanger one's life, Professor Mark Osler of the University of St. Thomas posted a similar sentiment in his blog.  As a college professor and activist who regularly speaks out about clemency, he wrote about a recent visit to the White House:
"Yet, here is what is happening:  This afternoon I will walk into the White House compound.  I'll be given a blue pass with an "A" on it (if previous visits are any guide), and I'll talk to several administration officials -- the very ones I have criticized.  I'll be allowed to speak and be part of a discussion. And then I'll leave and be on my way.

No one is going to imprison me.  No one will threaten me.  No one will follow me furtively as I pass through Washington.  None of that.  All that will happen is that I will be heard, and hear from those with other views, right at the White House itself.  Perhaps they will convince me I am wrong (it is possible), or I will convince them.  And then I'll go home.

Isn't that just a stunning, wonderful thing?  Thank God for America -- world, this is how you do it!"

Similarly, we greenmomsters can write our elected officials about drilling off the coast of Virginia, write letters to the editor regarding the environmental injustice in Flint Michigan, organize with our faith communities to control the emission of greenhouse gases, speak out about stormwater management at town council meetings, teach neighbors about planting native plants, or participate in a rally against fracking on the Capital lawn.  We won't get arrested; our safety won't be threatened.  As Professor Osler said, isn't that just a stunning, wonderful thing?

Because the American identity is alive and well, and allows for peaceful and civil freedom of speech, what reason do we have for not speaking out? 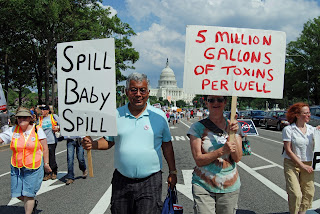