Have you ever heard someone say that it’s OK to throw trash like excess fruit, sandwiches,or nuts out of a car window because “it’s biodegradable”.  I think most of us know that excuse doesn’t pass the sniff test, but for those who still need a little convincing, take a look at this guy 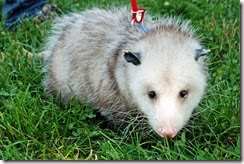 .  He loves your trash and will go almost anywhere to get it.  During a recent wildlife presentation at Sky Meadows State Park, the folks at the Blue Ridge Wildlife Center reminded campers that edible trash near roads attracts wildlife, such as this Virginia opossum.  Unfortunately, animals that are attracted to the sides of roads are often hit by cars – bad news for both animals and cars.  So instead of tossing your “biodegradables” out of the car window, always take them to the nearest trash can.  The deer, gophers, skunks, and possums thank you!