This winter’s cold temps and the spring’s rain prevented us from monitoring our stream over the past few months.  As June was winding down, it was time for our family to monitor our assigned stream, Difficult Run in northern VA, for invertebrates.  We danced 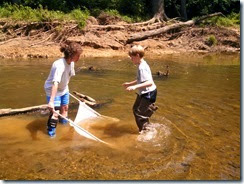 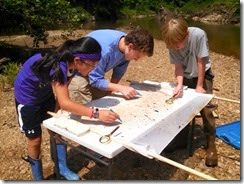 As we’ve mentioned in previous posts, our stream is still alive, but not exactly healthy.  Thanks to sedimentation and suburban runoff, the results were the same this time (officially, “unacceptable ecological condition.” )

One creature we did see a lot of was the caddisfly, so let’s take a closer look at these little creatures.  There are over 300 species of caddisfly in Virginia alone (Flint et al 2009), with over 1200 species in North America north of Mexico (Virginia Tech 2014)!   During our stream searches, we’re just looking for caddisfly larvae that live in streams; these particular invertebrates are not highly tolerant of polluted or impaired water, so it’s a good sign that we found several.  Caddisflies in this area lay their eggs on the surface of the water, and overwinter as larvae – the form for which we were looking.  They go through an entire metamorphosis (egg, larval, pupal, and adult stages) during their life cycles (this type of life-cycle is called “holometabolous”, just in case you’re ever on Jeopardy)

When they grow up, they’ll look very similar to moths, with membranous wings:

(photo credit:  Brigham Young/VPI & SU PCD0330076).  One of the interesting habits of caddisflies is for the larvae to build protective cases around themselves out of silk and either organic (sticks, grass, leaves) or inorganic (pebbles, sand) materials.

Caddisflies play an important role in their environments.  Some caddisfly larvae are grazers, while others are predators that feed on smaller invertebrates.  Caddisflies also serve as an important food source for larger animals like fish.  Thus, a healthy stream environment often includes many caddisflies in all stages of development!  Want to learn more about caddisflies and stream ecology?  Be sure to check out this informative page by Jeff Shearer.