We adopted a stream–and it’s good for the local economy!

In several past blog posts, greenmomster has been updating you on the streams that our family has adopted and the unfortunate condition of those streams.  You might be wondering, what can be done to improve the condition of these impaired streams?  Streams can be restored through biological and 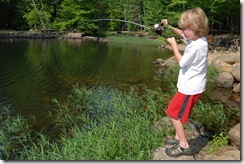 engineering projects, and a recent study conducted by the U.S. Geological Survey suggests that these restoration projects can be good for the local environment and the local economy!  As reported by the U.S. EPA’s Chesapeake Bay Program, a restoration of a 1.8 mile section of a tributary to the Anacostia River is yielding big benefits, both environmental and economic.  The year-long project, which cost $3.7 million dollars and was funded by multiple agencies and non-profits including U.S. EPA and the Fish and Wildlife Foundation, reduced erosion, improved water quality, increased and improved wildlife habitat, and provided recreational space for local residents.  Additionally, the project generated 45 local jobs, $2.6 million in local labor income, and an estimated $3.4 million in value added in DC and 20 counties in VA, WV, and MD.  Not too shabby!  For more information on this project, be sure to check out the U.S. EPA’s update.