This week’s endangered species is actually a whole group of species – the lemur.  Last summer, my kids and I visited the Duke Lemur Center in Durham NC – what a great place!  We saw many different types of lemurs (even the nocturnal ones), and learned about their habitat in Madagascar. 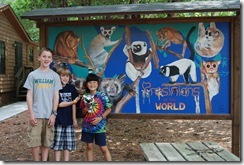 According to the National Zoo’s fact sheet on lemurs and the Arkive website, there are 103 species of lemurs on Madagascar, ranging in size from 1 oz. to 15 pounds and 4 feet tall!  Like all primates, lemurs have hands that can grasp and binocular vision, but their sense of smell is much stronger than most primates.  Lemurs do have tails, but they’re used for balancing, rather than grasping (the tails are not prehensile).  Fascinating research is currently being conducted at Duke University to see how these primates think – can they count?  can they work with abstract mathematical concepts? do they like to gamble?  Watch the video below to see what research is being done.

Unfortunately, these fascinating creatures are severely endangered.  The IUCN/SSC Primate Specialist Group lists 5 lemur species in its report of the 25 of the most endangered primates in the world – Greater Bamboo Lemur (Prolemur simus), the Gray-Headed Lemur (Eulemur cinereiceps), the Sclater’s Lemur (Eulemur flavifrons), the Northern Sportive Lemur (Lepilemur septentrionalis), and the Silky Sifaka (Propithecus candidus).  91% of all lemur species are listed as endangered by the IUCN.  The primary threats to lemurs are habitat loss and hunting.  Additionally, Madagascar has been politically unstable since a coup in March 2009, which leads to a lack of enforcement of wildlife laws.  According to Russell Mittermeier of Conservation International, the new government of Madagascar is not recognized by any other government and much international aid has been pulled from the country.  USAID currently provides only humanitarian aid.

It wouldn’t just be lemurs benefitting from protection of their habitat.  As stated by Mittermeier, protected areas or “reserves are important not just for Madagascar’s biodiversity; they are essential for the long-term well-being of its people. The vast majority of the ecosystem services benefiting Madagascar’s human population derive from these protected areas. These services include water from forested watersheds, pollination, maintenance of productive soils, fibers, building materials, plant foods from the forest and carbon sequestration.”

So what’s a greenmomster to do, in order to help the lemurs?